Firstly, apologies to any subscribers who got hit with the backlog of reviews. I’ve finished upping them now.

So, on Thursday I went to the Barfly to review Ox.Eagle.Lion.Man, Cazals and Cut Off Your Hands for Birmingham Live. I’d heard of all three but couldn’t name a song by any of them so much of the day was spent listening to the two co-headliners so I could at least recognise some of their sets.

I’d expected to miss Ox.Eagle.Lion.Man because I was playing 7’s football (4-1, I scored a hat-trick since you asked) but somehow I managed to shower, change, etc in record time and was at the venue in plenty of time. I was pretty chuffed with that, having resolved to catch more support acts and not just turn up for the headliners. Unfortunately I hadn’t listened to any of their stuff and had got it into my head that they were a folky/acoustic act – wrong.

I’m still baffled as to how a Levis-sponsored bill featuring three up-and-coming bands could be so badly attended. There were no other big bands in town, it didn’t coincide with anything of Valentine’s Day-like proportions, it was advertised everywhere you’d expect and tickets were a pretty reasonable £8. Surely there are 100 or so people in Birmingham who would rather a night out seeing some live music (any live music) rather than sitting in front of the TV. Surely. Surely?

I’ve since discovered that Cut Off Your Hands will be back in Brum on 19 March at The Yardbird. I’ll take any excuse for a night out there so might trot on down for that.

Another positive from the night was that I got to meet the photographer Lee Allen whose snaps accompany my review on Birmingham Live. He was a nice bloke and I’m sure I’ll be bumping into him again.

Plans for this week:

A good week then. I’m looking forward to starting the course although it’s been a while since I’ve been taught anything in a traditional sense.  It’ll be interesting to see who else is going to be there too.  Anyway, I’ll report back on all of that later.

When you go to a gig you expect the loud music and the press of bodies to keep you nice and warm but last night it was even colder inside the Barfly than it was outside.

In a city the size of Birmingham, for barely 40 people to make it out to see three decent, hotly-tipped bands is nothing short of embarrassing. I’m even being generous with 40 – deduct those of us sent along to review or photograph the gig, the promoters, the bar staff and the band members themselves… it doesn’t bear thinking about. 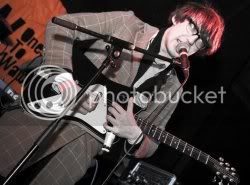 So, to the bands and Ox.Eagle.Lion.Man were first up. Singer Frederick Blood-Royale (crazy name, crazy guy) acts like Jarvis with demons. He stalks around the stage making like a mop-topped Nosferatu while the band churn up some suitably gothic (but not goth) ambience. He has a nice line in theatrical posturing although you get the impression that the torment doesn’t run that deep.

It was a bit Nick Cave and the Bad Seeds-lite, but I’d much rather see a band striking out in that direction than be supjected to yet another bunch of first-on-the-bill, Oasis/Stone Roses wannanbes. A decent start to the evening then.

Cazals weren’t quite what I was expecting. Being signed to a label like Kitsuné means that there’s no shortage of remixers available to point their tunes towards the dancefloor and so the songs that I do know, I realised I only know via samples. While I was expecting neon, synths and drum machines, the reality is sharp, power-pop.

‘Time Of Our Lives’, ‘New Boy In Town’ and ‘Cut A Long Story Short’ plough similar furrows, marrying lively guitar riffs and slightly gruff vocals. Now and then there’s a hint of an electro influence – a synth is brought into service a couple of times and one song starts and finished with the tick of a drum machine – but they’re a guitar band first and foremost.

The set was rounded off with new single ‘Life Is Boring’ and ‘Poor Innocent Boys’ and those of us that were there clapped appreciatively (not just to keep our hands warm as big-coated singer Phil recommended). The thing is, Cazals aren’t a band to be watched and admired from a distance; they’re a band to get involved with and move along and so were hamstrung by tonight’s circumstances.

Mercifully, given the cold, Cut Off Your Hands took to the stage slightly early and seemed keen to just give a good account of themselves and get out. The Auckland quartet trade in a similar sound to fellow co-headliners Cazals although they keep the tone a little lighter.

Singer Nick Johnstone didn’t seem at all happy, turning away from the sight of an empty venue at every chance and betraying his Martin Fry-clean-cut looks occasionally by leaning back and spitting above himself. An injcection of spit and bile didn’t hamper the songs though – ‘Still Fond’ was fast-pace jangle-pop, ‘You And I’ was a riot of staccatto guitars and vocals and although ‘Oh Girl’ took a poppier, more laidback approach the choruses retained an edge.

I was impressed by Cut Off Your Hands – a great band that more than kept up their side of the deal on a bad night. When Nick signed off by announcing ‘This has been the most depressing night of my life’ I could only sympathise.

Photos by Lee Allen. This review is also appears on Culturedeluxe and Birmingham Live.

Ok, before I go and get busy, I mentioned in may last (first) post that I’ve got quite a full couple of weeks coming up.  I’m just going to run through what I’ve got on my plate.

On the gigs front, I’ve got the review of tonight’s Cut Your Hands Off/Cazals/Ox.Eagle.Lion.Man show to write up.  The review will be up here and on Birmingham Live tomorrow along with what look like being some pretty good photos.

I might be doing interviews with a few of those too – fingers crossed.

Also coming up is the Birmingham Live meet-up on 2 March at 5pm, Poppy Red.  It’ll be good to meet everyone involved with that and figure how it’ll be organised and where we can take the whole thing.

I’m also lucky enough to have been accepted on to the music marketing course being run by Punch Records.  We’re hoping to do some interesting things with Culturedeluxe Records this year and I’m looking forward to what I can learn on that course. That starts on Monday so I’ll be reporting back soon.

Where the day-job fits in with all this I don’t really know.