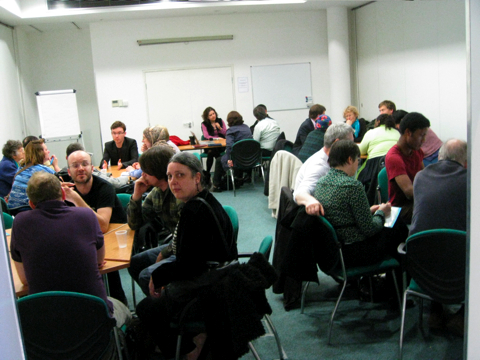 I’ve had a great evening.

I’ve not long returned from the Birmingham Social Media Surgery held as part of Blog Action Day 08.  If you’re reading this there’s a fair chance that sentence makes sense to you.  If not, it was a chance for folk from community and voluntary groups to sit down with some soi-disant social media ‘experts’ and get some free advice.

Nick Booth posted in advance of the event here but the reality must have far exceeded his expectations.  I arrived 15 minutes late to find the scene in the pic above – several people crowded round each ‘expert’ with some serious learning going on (on both sides).

It really was great.  I spoke to some people about sharing calendars, how to sort out hosting, what WordPress is and how blogs could be used to support film making projects.  I hope my advice was helpful; I certainly learned a lot about how to pass this sort of information on and apply it to the concerns of those trying to make a difference.

Anyway, as mentioned it was scheduled as part of Blog Action Day.  The object of BAD08 itself is to get as many bloggers as possible talking about poverty and raise awareness/start a conversation/etc and so on.

I wouldn’t say I’ve got anything groundbreaking to put offer besides my own experience of this evening.  Instead, I’d like to highlight a post Cat Bray has written called Blog Action Day: Shelter, a conversation.  Essentially it’s an IM chat she had with her fella about charities, in the course of the which she said:

i think one of the most effective things charities can do is tell you where your money is going, or better, show you

Which is just what I (and several others) have spent the evening telling community/voluntary orgs to use social media to do via blogs, video, podcasts, etc.

Hopefully we’ll get the chance to do the same again sometime soon.