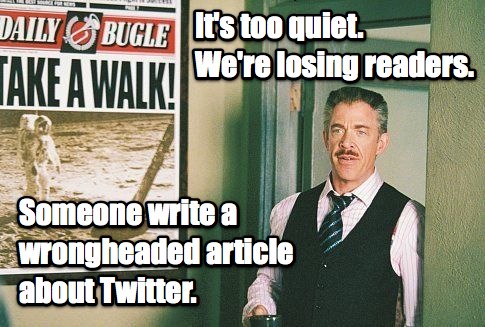 This isn’t yet another post banging on about how great socia media is, ok? It’s a glorified links round-up. Sure, I might want to prove a point, but it’s mainly a round-up of useful scraps of info.

Just wanted to make that clear.

For a bit of background, the Birmingham Post printed a piece by John Lamb, Birmingham Chamber of Commerce’s Press & PR Manager, today in which he castigated social media – seemingly Facebook updates in particular (although Twitter and MySpace got a mention too). Dave Harte and Jason Hall have pretty much covered my thoughts on the matter.

Now, there’s nothing necessarily wrong with giving social media a kicking if it’s done right, but John Lamb’s attempt was so clumsy and unbalanced that I’ve been moved to provide some redress.

So, as John cherry-picked the most banal things he heard via social networks (mainly Facebook, I think) over the past week, so I’ve picked out the most useful things I’ve discovered via Twitter in the past 24 hours.

Actually, I’ve only gone back five hours but I reckon that’s plenty.

Of course, I’m not saying everything in that list would be of interest to everyone, just me – but then I follow people who interest me. Seeing as how all social media does is help people to communicate, perhaps John Lamb’s real problem is his network.

3 replies on “How useful has social media been today?”