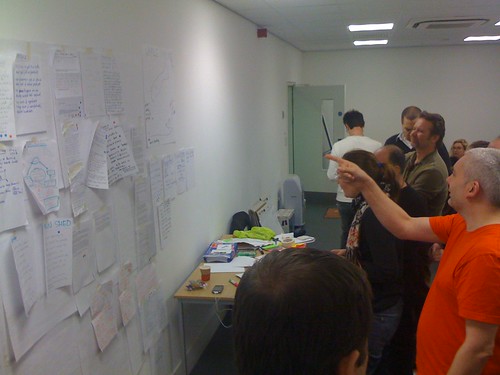 I’m taking part in the F2 Digital Creative Development Programme being run out of the Institute for Creative Enterprise in Coventry.

The other participants are creative types from a diverse range of disciplines – curators, dancers, website and graphic designers, filmmakers and all sorts. There are about 20 of us in all. Best of all, before this course, I had no idea who most of them were – getting out of Birmingham and into new networks is a healthy thing to do.

The purpose of the course is to get us thinking creatively around digital stuff and mixing up the viewpoints we bring from our respective backgrounds. The ‘digital stuff’ part of that isn’t really a huge leap for me as I tend to be immersed in the sort of stuff we’ve been covering. What’s been hugely valuable so far is the thinking time it’s afforded. I’m looking forward to seeing what I’ll learn in the project development stage too.

Anyway, the first phase of the project came and went in the first week of December. This was the stage of ‘ideas generation’. Via a variety of guest speakers, workshops and activities we came up with the germs of 50 or so ideas. Some were good, some were bad, some I’d be interested in pursuing outside this course

The various speakers we had were all brilliant so worth a mention here:

I’d seen a version of his talk at Shift Happens – he’s concerned mainly with interactive storytelling and gave an overview of the sorts of projects he’s been involved in and some of the thinking behind them. After that we did an idea-generation workshop thingy based on classic movies. Actually, the idea for a project that we came up with in his workshop is the one we’ll be pursuing later in the programme.

A composer, sound designer and PRS Award Winner for The Fragmented Orchestra. A truly fascinating talk, as I know comparatively little about audio projects.

He introduced us to examples such as Primal Source (which blew my tiny mind), David Byrne’s ‘Playing the Building’, the Stockhausen Helicopter String Quartet, sound waves in salt, this fantastic Rubens Tube video, Advanced Beauty by Jelle Feringa, the music video for Solar by Flight 404 and the fan mosaic video for a track by Sour.

A consultant on all things computer game. She introduced us to the varied terrain of computer gaming and went into a little more depth on Snow World (used in the treatment of burns victims), Prof Layton and the Curious Village (an educational game but never marketed as such), Little Big Planet and the very impressive The Marriage by Rod Humble.

Andrew works at Blink Media and talked to us about located mobile experiences. Examples he used included Free All Monsters, Running Stitch, The Hat Game at SXSWi, Mogi Mogi, Foursquare and Gowalla. He also mentioned a mobile project by Graham Harwood and Murmur – a project using tags on real world items.

While sat in his talk I was feverishly downloading the iPhone apps he was mentioning, including Comob, Star Walk, Layar and some soundwalk and sat nav/audio projects.

What we’ll be doing next

Having spent a few days coming up with lots of ideas and chosen one to work on (in a small team) the next stage is development. Our project is still fairly nebulous but it’s looking like being more commercially driven, as opposed to some of the more purely artistic ideas that others are pursuing. In the earliest stages there was a strong gaming and storytelling component which may or may not follow through to the final thing. We’ll have to see.

3 replies on “The Digital Creative Programme”