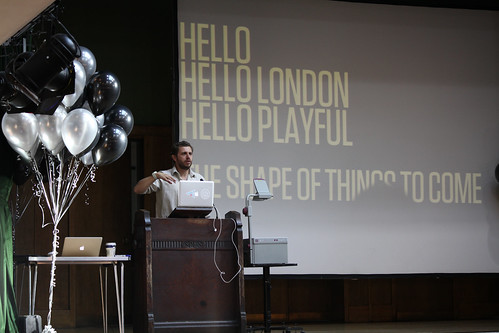 Last week I went along to Playful, a conference that describes itself as:

a one-day event all about games and play — in all their manifestations, throughout the contemporary media landscape. It’s a conference for architects, artists, designers, developers, geeks, gurus, gamers, tinkerers, thinkerers, bloggers, joggers, and philosophers.

There’s no sense in me writing copious notes here as I spent the day running the conference’s liveblog and so have probably written enough already. I will say that it was a very good event, so copious thanks should go to the organisers, sponsors, speakers and ticket buyers who all made it happen.

Actually I will say a bit more. The thing about running a liveblog is you end up writing loads but there’s no time to think or reflect on what’s said. A week later, these are the two themes from the conference that have settled in my mind. I don’t think I’m done thinking about them yet, but here they are for now:

Although they contained some great lines, none of the ‘this future is rubbish’ rants really chimed with me and, besides, they often seemed a bit far off topic. I’m more interested in how such strong expectations are formed, whether/how they might be managed and, ultimately, the conditions under which they might be met or frustrated (and the circumstances under which one or the other might be more appropriate). I think I’d like to hear a talk about that.