Look at this mess. 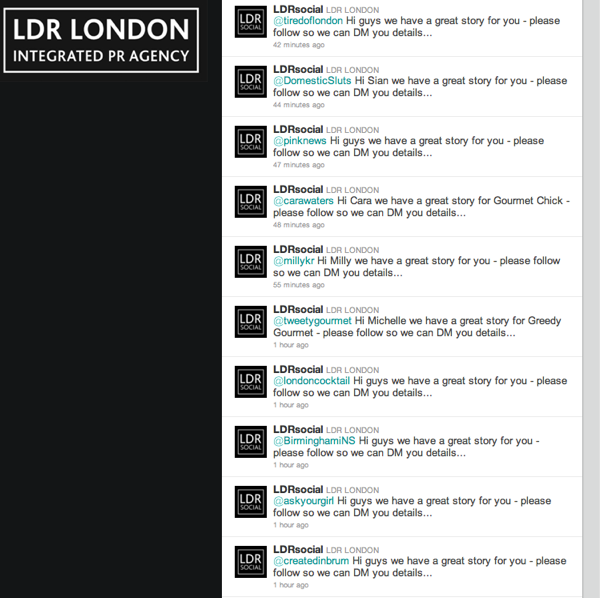 There’s been a rash of this stuff lately. It irritates me in a way that’s hard to explain but usually I ignore it – we were all new to this stuff once upon a time. Thing is, not only is this cack-handed and lazy but, because LDR London claim to be a decent agency, some poor sod must be paying for this.

It’s not as if I don’t try to help. There’s a contact page on Created in Birmingham – it has an email address, a contact form, a postal address and, in case that’s not enough, there are some step-by-step instructions explaining how to get onto CiB.

For that matter, because I don’t use the account in a particularly conversational manner, the @createdinbrum Twitter bio says “@ChrisUnitt is the person to chat to”. And anyway, why would I want to follow a Twitter account that spams people like that and just wants to send me a press release? That doesn’t sound fun.

It wasn’t just me who felt the need to point out the obvious: 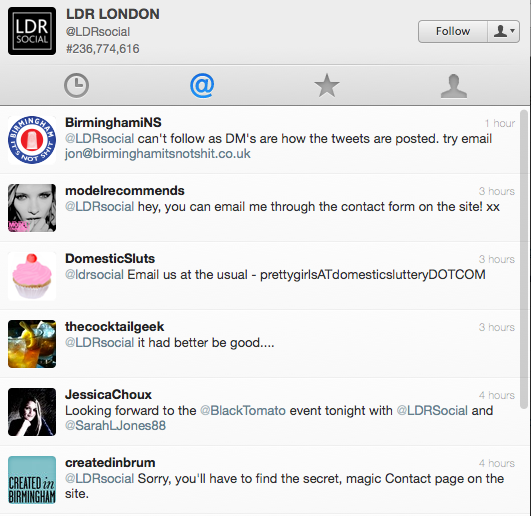 Is my minor hissy-fit missing a bigger point?

Perhaps the accepted wisdom – that a more personal, conversational approach is the way to go – is wrong, and the way to extract maximum value from Twitter is to use it ruthlessly efficiently.

Maybe, in a commercial context, it’s enough to use Twitter to follow your industry peers/contacts/sources of info and occasionally fire out messages to people who might be useful. You’d miss out on some of the deeper benefits that Twitter offers but they’re not guaranteed anyway and you’d be minimising your level of investment in the platform.

It’s not necessarily what I’d recommend, but I’m not blinkered enough to think there’s only one way of using a tool.

It strikes me as a risky tactic though. Beyond a bit of antagonism from people who feel like they’re being cynically targeted, there’s a chance Twitter will think you’re a spammer and shut you down – after all, it’s the way spam bots behave. I’ve tested this out and, on a new account, you can usually tweet the same message to about ten or so people before Twitter catches on and closes your account. Quite right too – imagine if every brand used Twitter like that.

The other week the British Museum tried this tactic to promote a debate with Grayson Perry. In a short period of time they put out 100 identical tweets to a range of people before Twitter applied the brakes – not because they were seen as spamming (presumably having an established account with around 65k followers gives you some leeway) but because they reached their daily limit (see info about limits here). This caused some issues.

Still, I didn’t see any complaints from anyone and presumably it had the effect of increasing the number of people who were aware of the debate and the museum’s Twitter account more generally. So that’s good.

Like I say, I think it’s a good thing to find new ways of using these tools. Accepted wisdom is fine and useful as long as it doesn’t limit invention and lead to needless homogeneity.

On the other hand, if you want me to promote your client for you, a little effort on your part wouldn’t go amiss.