I couple of weeks ago I saw an interesting comment left by James Yarker of Stan’s Cafe on this post by Matthew Linley. Matthew talks about livestreaming and mentions the Guardian’s collaborations with the Royal Opera House, Roundhouse and King’s Place. James says:

Call me a Luddite but I want to be in a room with my actors. Don’t anyone say 3D will change that. I need to know what they smell like and that they could leap out and throttle me if they choose to.

Don’t read the comment I left – I’m talking about something else and besides, I said ‘less’ when I meant ‘fewer’. Unforgivable.

There’s been a lot of talk about livestreaming lately and over the past week or so I’ve tuned in to quite a few, including Jérôme Bel’s Tate Live performance and a short Kathleen Edwards gig (archived somewhere here) and I’ve been involved with some livestreaming from the Royal Court Theatre. I’ve also had a poke around Tate’s Damien Hirst 360° Private View and the relaunched Google Art Project – they’re not live as such, but digitised versions of a thing that can be experienced. 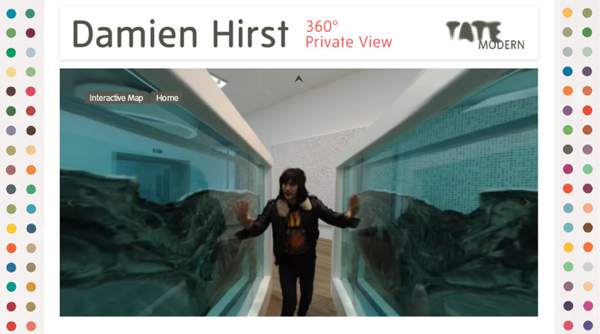 Here’s my take on the whole thing. First up, here are the arguments for and against. Read these and save yourself a lot of time reading other articles…

This is true of livestreaming both in comparison with live events and in and of itself.

Firstly, as James says, it’s not the best way to experience theatre because there’s no way to reduce physical presence, atmosphere and communality to ones and zeros that can then be transmitted between machines.

Secondly, it’s not a particularly great use of the possibilities offered by the internet – ‘the equivalent of putting radio on TV’ is how most people put it, and a waste of all that lovely dynamic, interactive potential. Tacking on a #hashtag for discussion just isn’t sufficient.

This is also true, because:

Want my rather disappointingly balanced opinion on the whole thing?

Livestreaming and live events are different

That means they’re good and bad in their own ways. One will inevitably feed off the other but I think there’s plenty of room for the two to rub along together. It’s a boring and less controversial opinion, but I’d say it’s surely more correct.

I suspect the current rash of commentary around this subject represents people trying to come to terms with it. For the time being they aren’t confident judging an online experience on its own terms and feel the need to anchor their criticism by comparison with something they are comfortable with.

Hopefully this will pass. Nobody writes hundreds of words about how the books produced alongside exhibitions are a poor substitute for seeing the real thing. There’s no real difference here.

To expand on my last pro-livestreaming bulletpoint about risk, I can well understand why some people might not want (or might not think they want) the experience that James Yarker describes. A hardened theatregoer might relish it, but someone else might not want to pay money, leave their comfy sofa and give up their evening to find out for themselves. An online taster gives them a way to dip their toe in.

On a different (but not unrelated) point, I liked this quote from Wayne McGregor:

Putting dance on the internet is leading to some phenomenal things. When I went to the Bolshoi ballet company in Moscow recently, a lot of the dancers there had learned one of my pieces from YouTube: they were really inspired by being able to see something that they had no access to in their own country.

One reply on “My take on livestreaming”