This week I’m blogging about big data in the arts and culture sector (see the intro to the series here). In this post, I’m going to take a look at what’s been written so far.

I’m collecting links on Delicious and will probably add more to this post. I might well tidy it up a bit too.

If there’s anything good that I’ve missed then please put a link in the comments (multiple links sometimes get flagged as spam I’ll keep an eye out) or send it my way on Twitter. I’m mostly looking for pieces that directly discuss the application of (big) data to the arts sector. That said, any stellar pieces from further afield might be good.

UPDATE: I realise there’s a lot to get through. If you’re pushed for time, I’ve distilled everything down to one image: 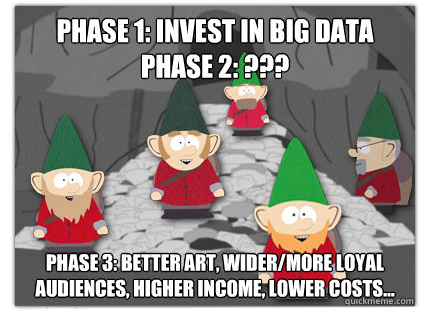 Hope that helps. Anyway, here’s what I’ve been reading…

Big data are a collection of data sets so large and complex that it becomes difficult to process using on-hand database management tools or traditional data processing applications. The challenges include capture, curation, storage, search, sharing, transfer, analysis, and visualisation.

Inspired by research in the charity’s report ‘Counting what counts’, the ‘Big Data’ project is looking to fund consortia of arts organisations working with a technology partner and a research partner who wish to investigate Big Data in the arts

Is Big Data the Next Frontier for Innovation in the Arts? | ArtsFwd

For three years, I have been using data to evaluate the integration of the arts into non-arts curriculum on Wesleyan University’s campus. We have developed surveys and coded narrative responses in order to learn what is working, identify which disciplines have the most successful collaborations, and see how open students are to experimenting with this type of learning. While our gut told us incorporating the arts across the university would benefit our campus and students, we now have data to support that idea and have tweaked our programming based on what we learned in order to make it even more successful.

Program evaluation is something that all arts organizations should be doing, but what if we took it to the next level and incorporated data analysis ideas throughout our offices? Data could benefit every department of our organizations. It could identify how members like to receive information, what type of programming has the greatest impact, and what time of year is best to start a fundraising campaign

Data culture #1: back to (data) basics | Culture professionals network | Guardian Professional: A comment from Roger Tomlinson on this piece:

Increasingly, ticketing system databases offer the tools to join-up all on-line and purchase inter-actions including social media and web analytics, to provide a “database-of-truth” about customers. The crucial issues are in the quality of the data – garbage in, garbage out – which does rely on the Box Offices and data collection practices of the participating organisations, and on the willingness of arts organisations to seriously be interested in their attender behaviour and reaching the widest audience”

Maybe “big data” really is going to propel art and artists into new and better ways of producing work — but not (I hope) necessarily in the sense of basing artistic decisions on what is the most marketable.

Also, in the comments:

UK’s Open Data Institute (ODI), they’ve combined the two in order to create what some might consider thoughtful pieces: – a vending machine that vends based on terms related to economic recession in the BBC’s News RSS feed headlines – a translucent pillar that goes from clear to cloudy whenever references to genocide, crimes against humanity, crimes of aggression, and crimes of war appear in a monitored news stream online

Art in the age of “big data” | Nicola Triscott

At ISEA, there are a few examples of artworks using large data arrays. Agnes Chavez & Alessandro Saccoia’s (x)trees, for example, at the Albuquerque Museum of Art & History is a socially interactive virtual forest generated from search words found in tweets and text messages, an experiment in data visualisation, video mapping and participatory art.

Arts Marketing: What if you didn’t have to guess? – Discusses some interesting examples of where market research was valuable for Arena Stage, including positioning of Arena Restaged, branding, customer service and pricing. None of it all that ‘big’.

In To Save Everything, Click Here (2013), technology writer Evgeny Morozov notes that Amazon is sitting on vast amounts of data collected from its Kindle devices about what part of a book people are most likely to give up reading. In the not-too-distant future, Morozov speculates, Amazon could build a system that uses this aggregated reading data to write novels automatically that are tailored to readers’ tastes.

Why we are big on (big)data – Digital scholarship blog

Novelty will always claim the earth (especially when there are juicy funding grants involved).

How We Deal With Big Data, Digital Humanities and the Arts? | Information Systems in the Visual Arts

So, what would happen when Big Data, humanities and the arts intersect? Of course, marketers always seize the opportunity when they see potential in developing marketing tools with advanced technologies. With the increasing database of worldwide art auction records, companies like artnet provide services like market indices for art investors; for companies like Artsy, it claims the more you use, the more you contribute to its database and the more accurate it tailors your taste. As for museums, big data convey the hidden reaction of audiences; from collecting zip codes, website attendance, and online behavior, the museums could reinforce the visitors’ experience more than ever before.

There are any number of sketchy whitepapers and similar out their (chiefly produced by vendors). The following are more closely related to the discussion about Big Data in the arts:

Counting What Counts: What Big Data Can Do for the Cultural Sector: I’m planning to go through this in a separate post later in the week because there’s a lot to say about it. For now, here’s the discussion of the report I’ve seen elsewhere:

Rise of the Datavores by Hasan Bakhshi and Juan Mateos-Garcia

Let’s Get Real: How to evaluate success online

2013 TLA Plenery “The Big D: Big Data and the Performing Arts” – Call for Proposals – The Theatre Library Association is now accepting plenary proposals for the 2013 ASTR/TLA Conference in Dallas, Texas, Nov. 7-10, 2013. The emphasis of this conference is to explore the research possibilities available by interacting with large digitized datasets in conjunction with theater and the performing arts.

We have supported projects for most of the 6 priority themes of the Digital R&D Fund. However, we have had few applications focused on the theme of ‘data’. To address this we are making a separate Call within the R&D Fund for consortium projects, in the area of data sharing and Big Data specifically in the context of business model innovation.

The AHRC is pleased to invite proposals for projects to explore Big Data from an Arts and Humanities perspective. The AHRC has a total of £4m capital funding available under this call

Big data isn’t something that’s just being covered breathlessly by the likes of Forbes and Fast Company; arts and culture organizations and nonprofits are generating, collecting and sifting through their own data and collaborating to make sense of it all. Initiatives like the Cultural Data Project (CDP) and the National Arts Index have been collecting and sharing data since 2004 and 1998 respectively (check out Baltimore’s Local Arts Index).

The Cultural Data Project and Its Impact on Arts Organizations: A piece from Createquity discussing the current shortcomings and the future potential of the CDP.

Someone very high up in the organization has to be an effective advocate for the use of data. Companies should be seeking a leader, a chief data officer — or whatever you want to call the role — who can understand the complexities of the business, recognize opportunities for better use of data, and make the business case for assembling the resources. Just as every function participates in the process of finance or marketing or other areas of senior management in some way, every function would be aware of how they could be improving their use of data.

Sigh. if only this were true.

In reality, the current conversation about big data at most companies is centered around how much to spend on Hadoop or storage or advanced analytics technology

Against (talking about) “big data.” | The Stone and the Shell

Conversation about “big data” has become a hilarious game of buzzword bingo, aggravated by one of the great strengths of social media — the way conversations in one industry or field seep into another. I’ve seen humanists retweet an article by a data scientist criticizing “big data,” only to discover a week later that their author defines “small data” as anything less than a terabyte. Since the projects that humanists would call “big” usually involve less than a tenth of a terabyte, it turns out that our brutal gigantism is actually artisanal and twee.

When thinking about big data, video games may not immediately come to mind but in reality, video games today are always-on, digital interactive entertainment that transmits huge amounts of data across the network as you play. Our network processes terabytes of data every day just from gameplay events. As our games become even more interconnected and cross-device enabled, the experiences become even richer and telemetry will only increase.

At Netflix, big data can affect even the littlest things:

The success of a show like Orange isn’t entirely because of data, of course — it still has to be well written and acted, and the show is based on a memoir rather than the result of an algorithm that creates TV concepts — but the data definitely helps Netflix figure out what viewers want to watch and how they want it presented.

Getting the Most Out of Google Analytics: not Big Data but scroll down to see what an ecommerce person checks regularly. Then also read this interview with the same guy:

We now test exhaustively. A single homepage graphic alone can have 20 or so variations. I’ve also been fortunate enough to be given the freedom to challenge conventions. We’ve recently moved away from mega-menus for example.

Also, in the hunt for talent to do anything with the data that’s being collected/out there, here’s what the competition are up to:

My company, IBM, recognized the coming shortage several years ago, and took a broader view in training high-potential hires with Big Data skills. In 2009, we began the process of recruiting 5,000 liberal arts majors to become data scientists in our consulting practice through a rigorous two-year program

There was a thing called Big Data Week with events in London back in April, although the website’s not too informative at the moment. Here’s a description courtesy of Wired and event listings on Meetup.

See also Big Data London on Meetup – nothing upcoming at the moment, though.

2 replies on “Big Data in the arts and culture sector: background reading”