Just a quick(isn) one, for fun. Yesterday, Culture24‘s Jane Finnis wrote a piece for the Guardian’s Culture Professionals Network called Why your cultural website is rubbish. 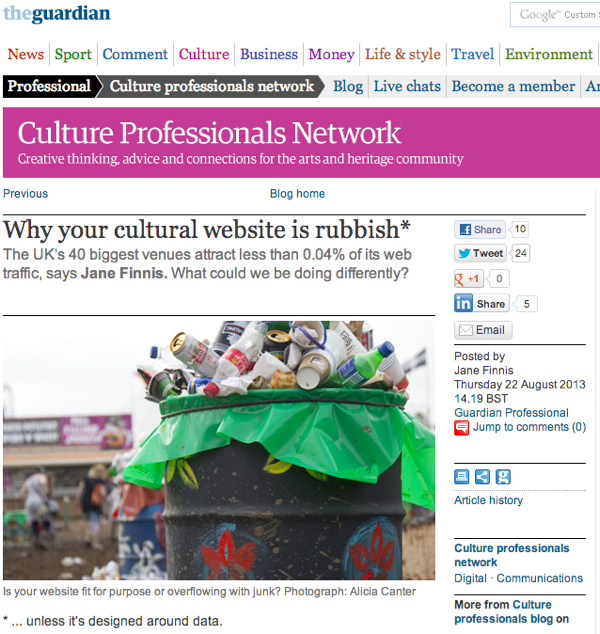 I was going to leave a comment, but it got a bit long, so I’m posting this here instead.

For background, Culture24 run a project called Let’s Get Real that looks at getting cultural organisations doing better things with web/online metrics. This is a good thing. The project has just been run for a second time and there’s a conference in Brighton on 16 Sept. A report’s due out and it should make for interesting reading. The first Let’s Get Real report certainly did.

Anyway, this Guardian article discusses that project and a three of the key findings…

And clarify it online. Define your specific audience segments, find your niche and make sure it is genuine, reflecting the actual content your organisation has. That way it will be easy to explore stories and interpretations that will ring true for audiences.

I think we need to be bold here, finding our own style, editorial voice and personality. Be confident about choosing your key online audience, just like you do in the physical world. This might be local, small, social, age specific or subject specific. You need to think about planning online content as you would in your venue, for example, targeted exhibitions or shows offering something special primarily for a particular group of people.

Yeeeah… I dunno. This isn’t wrong or anything, but it’s not where I’d start. This seems to be more about the content and messaging that goes on your site, rather than being about the site itself. Maybe I’d articulate this differently or perhaps it’s just that my focus tends to be elsewhere. I’m also not sure what this necessarily has to do with maximising online share of attention for the arts (see below re the stated aim of the project) – sometimes smaller and more targeted is better.

I think my point is that there’s a difference between the core purpose of an organisation and the core purpose of an organisation’s website. The latter should support the former and there are all sorts of routes to take with that. The quote above seems to be coming from a marketing POV, whereas a website can do a heck of a lot on the operations side of things. For instance, is your site going to be driven by transactions, community, editorial, something else or everything all together? What’s going to do the job best, given the resources you’ve got (essentially staff and cash)?

Then what functionality does the website need to facilitate that/those purpose(s)? There’s a slight chicken-and-egg situation here as functionality and content play off each other. However, a properly conceived user-centered design process often starts with (amongst other things) a set of user stories that are used to develop user journeys. These will map out key interactions making sure your site’s users are catered for properly.

Research shows that search engines still drive between 50-70% of traffic to most websites. But the art of SEO (search engine optimisation) is often neglected. Very few cultural organisations think about it or spend money on it. Crucially, once you have defined your niche, you will find it much easier to optimise your online content to reflect that and reach your audience.

Yep. Or at least mostly. In fact call this a ‘yes, and…’ because it’s not just about optimising content – a lot of optimisation needs to happen before a piece of content is ever written. It’s actually very rare that we ever see a brief that scratches the surface of what’s required, but at Made Media we tend to take care of it as a matter of course (because we’re pros like that). That way, no matter what crazy things clients might do with their sites once we hand them over, content should still stand a decent chance of being nice and discoverable by search engines. Luckily our clients are all 100% ace. Obviously.

I’ve written about SEO for arts organisations before. Beyond the basics, it’s an interesting and tricky animal – I could blather on about it for hours, but I’ll spare you (this time).

It’s definitely true that there’s not much love for SEO in the cultural sector and good on Culture24 for talking it up. User testing is a lot trendier at the moment (which is a good thing) so we end up doing a lot of that. However, you’d be surprised by how much you can find out from a simple SEO audit – both for planning a new site and for tweaking or making better use of an existing one.

3) If you’re planning an app, hold off

If the answer is an app, then what was the question? Apps are complicated, they eat money and are often driven by brand aspirations rather than user need. Research tells us that growth of traffic to cultural websites from mobile continues to rise by around 150% in the last year. So sort out your mobile friendly site first – that way you are solving a problem, not creating a new one.

Yep. I mean, there are perfectly good reasons for doing apps, but if you’ve got limited resources then chances are your time (never underestimate this) and money are best spent elsewhere. The situation is improving quickly – maybe since enough people got their fingers burnt (it’s amusing knowing the stories behind some of the recent darlings of the conference case-study circuit).

We’ve been doing tonnes of mobile work for a while now – it seems to have risen from a nice-to-have to a core feature for a new website. I think this might be because it’s so easy to justify financially. I can show the effect on our clients’ website traffic when we launch a mobile-friendly version and I’ve got some startlingly clear results from conversion rate analysis too.

Some other bits and bobs

We wanted to change the fact that the cultural sector were only small players in the online world.

I’m not saying there’s not room for improvement. Of course there is – shoot for the moon land among the stars, and all that.

Data from Hitwise in June 2011 showed that the percentage of web traffic to a cross section of 40 cultural websites (in fact the 40 biggest museums, galleries and venues) represented less than 0.04% of the total UK web domestic traffic, or 5.71 million visits. This is equivalent in the same period to the traffic to littlewoods.com. Think about that for a minute.

I’m not quite what sure what this is saying. It’s either:

Presumably it’s the latter and I’d agree with the sentiment. I don’t have 2011’s financial figures for Littlewoods specifically but, for a bit of context, they’re part of the Shop Direct Group along with Very.co.uk, isme and Woolworths.co.uk. In 2012/2013 the group’s turnover was about £1.7bn with 78% of sales carried out online.

Understand their own constraints and how these contribute to failures. These might include a legacy of disconnected technical systems; internal politics; procurement procedures; or the lack of an agile, iterative approach to development

Yeah, I think I’ve seen most of those, sometimes in combination. I’m sure I could add a dozen more besides (but probably better not). Although I’m not sure why agile development is apparently such a must-have – your choice of development methodology will depend on all sorts of things. Or maybe there’s just some loose terminology usage going on here.

Getting this basic stuff right would be real innovation.

Eh? Sorry to be pedantic, but that’s not right, is it? I mean, it’s an ok soundbite but doesn’t work when you think about it. Besides, I don’t get the fascination with innovation – is it just a word that makes doing worthwhile stuff more palatable, sugaring the pill? (Update – apparently I missed a hefty dose of sarcasm, so please excuse my slightly-too-literal take on this).

When it comes to digital stuff I think the cultural sector (as a whole – inevitable exceptions will apply) needs to ween itself off innovation a little, at least until the basics are sorted. Walk before running.

Seriously though, the number of website briefs that ask for innovation like it’s something you buy off the shelf. Especially when the budget’s barely enough to cover the basic must-haves…but that’s a rant for another day.

2 replies on ““Why your cultural website is rubbish”: some thoughts”