As previously advertised, on Friday I made my way down to The O2 to have a nose about.  I was there to check out the filming of a new advert highlighting all the goodly things available at the venue (priority ticket booking, access to private areas, etc) if you’re on the O2 network.

I gather that my involvement was part of a proof of concept – seeing what it was like to have bloggers involved in documenting what goes on behind the scenes.  Essentially I’d been brought along to blog, tweet, photo and video lots and was given pretty much unfettered access to do so.  There are worse ways to spend a Friday.

Anyway, I met up with @benrmatthews (who was doing remarkably well considering he’d been hosting 200 or so Twitterers at the inaugral Twestival the night before) and @drewb and we were ushered into a strange world of horses, wrestlers, bands, dancers and all sorts of other weird and wonderful things.

There’s no point me describing what went on because I was documenting things as I went along.  So, for a flavour of the day here are my tweets (to be read from the bottom up): 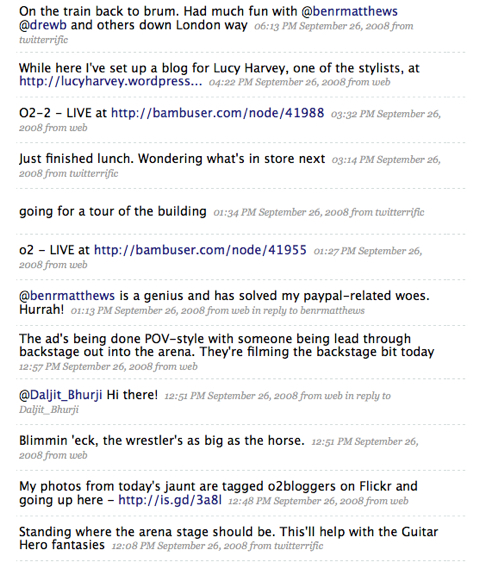 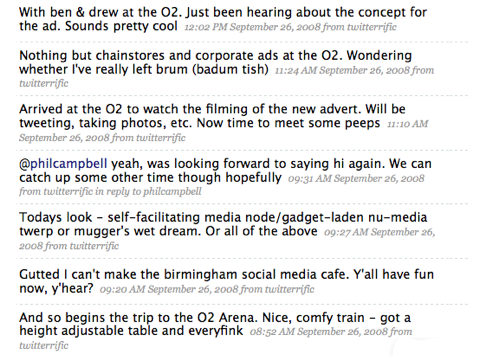 Here are my photos (there are more from Ben and Drew – we tagged everything o2bloggers):

And here are a couple of videos I streamed (and recorded) live using Bambuser, a nice little service that I’d all but forgotten about.  Please bear in mind that these couldn’t have been any more spur of the moment so there’s no incisive questioning or anything.  The first is with Ed from O2 who explained what the ad is for:

The second is with JP, O2’s Digital Communications Manager – the guy who monitors the internet and responds to O2-related problems, queries, etc that people might have:

Some other stuff from the day, bulletpoint-style:

Anyway, it was a good day.  I got to poke around the venue and saw some things you certainly don’t see every day.  It was fun to really put Bambuser, Flickr and Twitter to work for a few solid hours, even if the best lesson I learnt was about how quickly an iPhone’s battery can be used up.

I also enjoyed meeting the guys from Hotwire and am hoping to keep in touch, especially as some of Ben’s side-projects (the Twestival meet-up and Bright One, a PR company for charities and such) might maybe have some overlap with some of my own.