A couple of interesting things have been flung my way in recent days.  First up there was the invitation to the mobile phone-sponsored secret gig that I went to (and indeed blogged about) a couple of weeks back.  Now I’ve been invited to the Tory Party Conference and the filming of an advert for the O2 Arena. 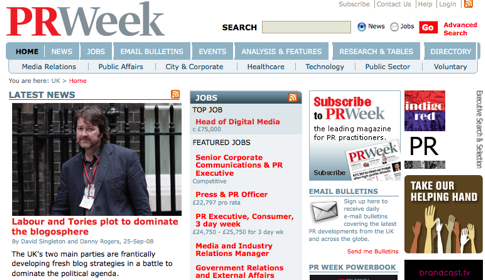 This is a funny one.  PR Week’s main story is about Labour & Tory plans to ‘dominate the blogosphere’:

it emerges the Conservative Party is trialling a local blogger charm offensive at its annual conference in Birmingham next week.

Head of new media Rishi Saha has worked with regional organisation Screen West Midlands to identify ten influential bloggers in the area, who have been given free VIP passes to the conference.

Caroline Spelman, Conservative Party chairman, told PRWeek: ‘As a West Midlands MP I am delighted to be engaging with leading voices in Birmingham’s new media.’

Which, slightly hilariously, makes me an influential blogger (thanks CiB) although I can’t remember ever mentioning politics in a post and there have been a lot since I took over in May.  Mark Hanson at the PR Media Blog has picked up on this and suggests that:

What’s fascinating here is that they have chosen non-political blogs to take part in this. The guests are blogging in the arts, culture and entertainment spheres. The aim is to build a groundswell of support amongst general opinion formers who may be persuaded to engage and debate Tory policies as opposed to rabidly backing or attacking.

The danger is that the bemused bloggers are hurded into a backroom in Birmingham for tea and buscuits, have an awkward Q&A with a bemused shadow cabinet member and then having ticked a box forget all about it

Anyway, we’ll see how that one pans out.

The invite to the O2 Arena was a surprising one.  I guess I might have popped up on their radar when I covered the Unlit thing the other week.  All I know about that one is that there’ll be some unsigned bands and some ‘spectacular acts’ to give a flavour of the sort of thing that happens at the big tent in Greenwich.  I’m allowed to Tweet, take photos and blog whatever I like so expect some of that in the next day or so.

Incidentally, my initial wariness over the approach from the PR guy was tempered by the person in question being Ben Matthews, one of the organisers of tonight’s Twestival (an event what has got me thinking interesting thoughts).

3 replies on “Blogging for the man”