Markers have been laid out across a map of England and Scotland making the shape of a chronometer. People are asked to go to the place of one of those markers and lay a stone, thereby building “a geoglyph which spans all of Great Britain, from Aberdeen to Bristol”.

One of the markers is a 10 min walk from my house, so I fully intended to do this. Probably. One day. That is until I saw a tweet from my old housemate Alex. Turns out he was going to make a Britglyph-related detour to Birmingham on his way to a weekend stay in Snowdonia. Hoorah!

So I met up with him and his buddy Phil, we placed our rocks and then they carried on their merry way. My photos of this momentous event are now up on the Britglyph site. Here are the rocks: 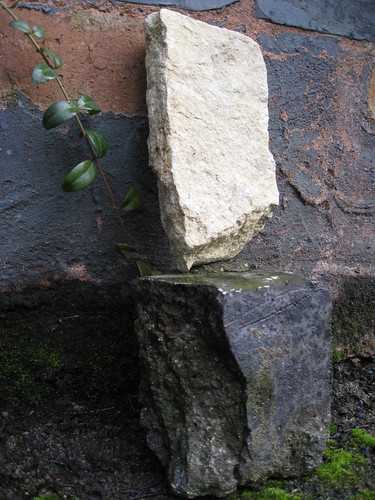 It’s worth mentioning another public art project involving stones – the V&A’s World Beach Project. I heard about this via a talk from Gail Durbin, the museum’s head of online, yesterday at an event called C:Cubed. There’s a post about that coming.