This afternoon I was Trig – one of the ugly sisters in Twitpanto, a production of Cinderella played out over Twitter. My co-stars were mainly Birmingham-based twitterers, along with a few of minor Twitter slebs.

Jon Bounds, a social media consultant, was responsible for the idea, script, direction… pretty much everything in fact, and a fine job he did too.

My fave things about Twitpanto:

Managing the number of #twitpanto tweets coming through was a bit of a mission. I started off watching the #twitpanto tag on Tweetdeck. However, with 15 minutes to go there seemed to be too much audience ‘noise’ coming through so I created a new group for cast members only. However, tweets came through too slowly, so halfway through I was glad to be able to shift to watching the Roomatic chatroom (screenshot below) and tweeting via Tweetdeck. 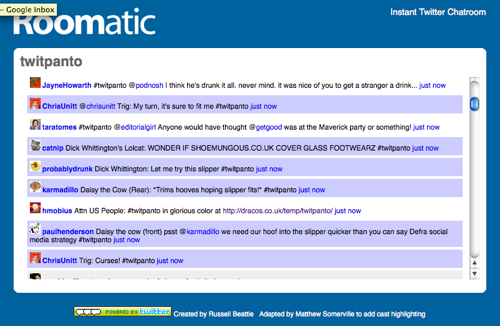 Matthew Somerville deserves hearty thanks for, first of all, knocking up the Roomatic chatroom and then tweaking it so the cast’s tweets were distinct from the audience’s.

There’s loads that could be said about something like this – why it appealed, what platforms were used and why, how the idea spread through networks, how it could be monetised/improved/replicated, etc and so on…

However, keeping up with the audience banter and trying to follow along with the loosely-prepared script was surprisingly exhausting, so for now it’s enough to say that it was a lot of fun and I can’t wait for the next one.

I’ll leave you with a few Twitpanto-related links:

And some other Twitpanto posts: