A couple of weeks ago I was invited down to Big London for Microsoft’s CESfest, a small event tying in with the CES expo in Las Vegas. I was invited down with a bunch of other bloggers and found it interesting, although not necessarily for the reasons advertised.

Ostensibly, we were there to see the new features that are being rolled out for Windows 7 and Windows Live. There was nothing particularly overwhelming on display. The features broke down into: 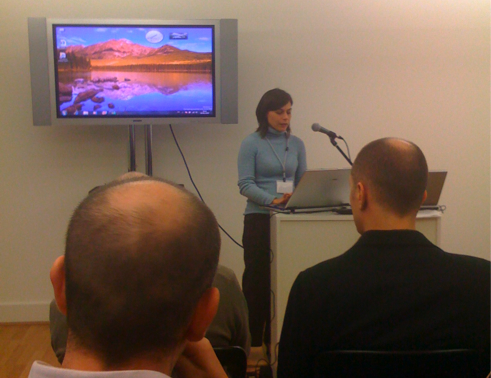 However, I don’t think that matters. For Windows Live especially, this was a case of pitching mini-systems to audiophiles.

When it comes to social media I’m a separates guy – I’m comfortable building my online profile with components drawn from various services. I make use of the better quality and the specific features they offer (although a little more data portability would be nice).  However, I fully appreciate that others have neither the time nor inclination for this. Facebook is popular because it rolls personal info, micro-blogging, picture sharing, events and all sorts of other things into one easy to use package.

The more logins, passwords, profiles and URLs to remember, the more excuses someone has to not bother, complaining that it’s too complicated, they don’t see the point, etc and so on. Windows Live is looking to engage as many ‘normal’ people as possible by removing those barriers.

The other interesting thing was the way that Microsoft approached the announcement – opening up to bring some noisy bloggers in to pick apart what they were offering. The event was broadcast live via Ustream to widen the audience (with questions there being monitored) and we were encouraged to ask as many tricky questions as we liked to get the most of the representatives who were there. Chris Hambly was there too and reckons this shows they have balls. I’d agree.

In the spirit of this I tweeted asking for awkward questions to pose to the MS reps. I got a few responses (not all fit to publish) and the one I read out asked why Windows 7 was coming out so soon, was Vista really that bad and how much budget was allocated to fixing Vista.

The (well practised?) answer was that MS tend to release a new OS every 3 years – with Windows 7 in beta now, a release in Jan 2010 would stick to that timetable, so Windows 7 isn’t particularly early. Mention was also given to the number of copies of Vista sold, although when it comes bundled with new PCs those sorts of figures need to be taken with a pinch of salt.

Anyway, all told it was a pretty good event and worth attending . Thanks to the Microsoft people for taking care of us so well and to the organisers (Colin and 1000heads) for the invite.