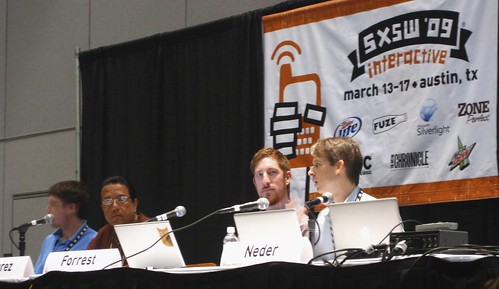 Museums can be conversational – you can go with friends and chat about the exhibits. Museums have not generally translated this online. The idea is to get visitors to help museums to collect and share.

The object on display is the point of conversation.

Each item in the museum’s collection will be on there eventually.

It also has a touch of wikipedia about it. Users can grab museum resources, add their own and tell a story.

Why did they do this?
Not bandwagon jumping.
It’s a very diverse organisation with locations all over. They are used to using tech just to operate.
They take a lot of viewpoints – academic, tribal, and cultural values and mash them together. Media has been very useful to find commonalities.

Hawaii Alive – traditional navigation/database model did not suit the best way to represent Hawaiian culture and values. Divided by realms of gods, man and ocean.

Teachers Domain – a crucial step on the way to Echospace. Filtering the best from worst practices but tricky to do so – delicate matters not wanting to insult a tribe

Realise that they’re being very open and that won’t go down well with some. Also accept that they don’t know everything and others can be brought in to give their view. Dark side of that conversation might come out but that’s needed.

They’re not stuck in a pre-contact ‘leathers and feathers’ state. They use tech.
However, there’s a tension when doing traditional stuff with new methods. for example, new media allows shift from telling a story to a few people in a room to being able to amplify that voice immediately and, potentially, globally.

All user uploads via the site go to a single YouTube account. A video that breaches YouTube’s T&Cs could be enough to have the account closed – a problem they’re still working on (although they keep back-ups of all videos).

Joy of oral history is that it changes with the telling – recording in this way captures and freezes those stories.

Also, the tribes have been burned before – people have taken stories, got rich off them and not paid promised royalties.

What happens if no-one uses this resource?

That’s fine. It’s a modular site so if some areas are not used they can dump it.

Yes, there is a moderator – a non-native anthropologist who will have her set of biases. Already found snags.