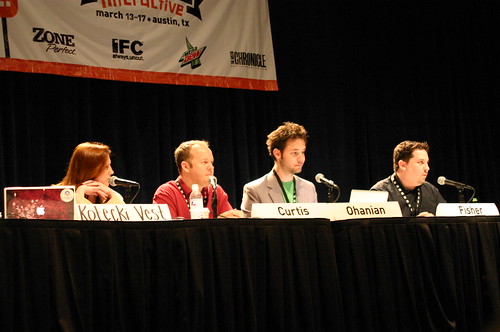 BlogHer started from a flame war about where all the female bloggers are.

How do you talk to your community?
F – have to take stuff with a grain of salt. Decide if their views are representative of all users.
R – give users the tools and let them do their thing. There are areas they have little/no knowledge of. Found a use for Twitter – can do a search so if someone’s ranting about Reddit he can see and get a conversation going.
A – Twitter useful for engaging people who are on the fringes of participation. Created a forum for complaining about Ars Technica. They don’t have to answer everything as other users may not agree. Doing this publicly can be tricky – give people a chance to slate you in public but transparency is appreciated and if there’s a problem that many complain about you should probably fix it.

How is the community policed?
B – strict community guidelines. Provide safety from trolling/hate speech. Set that standard very early and now the site polices itself quite well.
F – Their rule is don’t be too much of an asshole. They have ‘Nark’ button for reporting users but sometimes see people using this to report comments just to get people in trouble.
R – they set up a wiki for guidelines. Became a list of dos and don’ts. Now they let people set up their own Reddits and let them moderate them themselves.

What do you do with problem bits of content?
B – pulled immediately and email sent to originator to explain why. Anything borderline gets you yanked.
F – similar but philosophy is it’s not capital punishment, it’s just deleting comments on a web page. Can always revisit/reconsider.
R – ditto
A – they leave stuff up unless it’s spam. Worry about silencing people as it’s seen as censorship in the AT culture.

Also need to pay attention to the silent majority who don’t login, contribute, etc but make up most of traffic. Stats will tell you what they’re looking at, what they like and don’t like.

Common problem – forums with loads of topics. Starts off emptier and makes it hard for people to get to content.

Expectations online are very low. Engaging people in real life (or just via email) can be very powerful. Do this with the most engaged participants.

Is it worth educating users about being good net citizens?
B – yes. New people are always coming in so it’s good to restate things occasionally.

Other notes about this panel: