Yesterday, I went to an event at the ICE in Coventry – an introduction to an innovation labs thing called F2 Future Forum.

In the afternoon we were asked to think of challenges that we’d like to innovate around. We were then told that we would vote on the ones we wanted to discuss further. I said I’d like to discuss:

Which genuinely interests me. As I said when introducing my idea, everyone operates within communities – audiences, local area, suppliers, peers, etc. Quite often you’d like those communities to do something – turn up to your events, donate money, buy something from you, etc. Can you motivate people to do so using the elements usually associated with games?

Personally (or rather, professionally) I’m interested in bringing online communities together and getting them to view my content and/or interact with each other.

My idea was one of the most popular and went on to be discussed later.

Was my idea more compelling than some of the others on the board? I wouldn’t say so, but I would say I presented it better than some others. That’s not being big-headed, I just stuck to some basic principles which meant that:

The board was a mess of bits of paper, drawings, text and clutter. This is what it looked like (sans the more popular ideas): 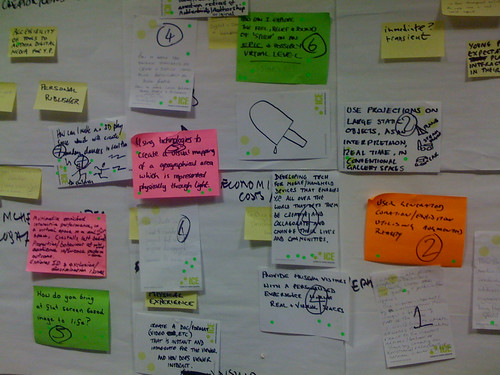 And here’s how I presented my idea: 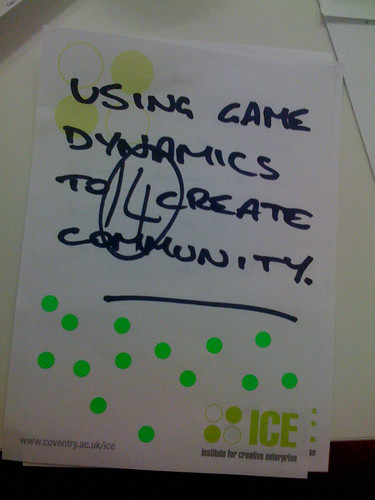 See what I did there?

Compare that to the ideas that didn’t make the cut and you’ll see that, no matter their merits, it was actually difficult to vote for some them. On the other hand, some of the other successful ideas (unfortunately not pictured) were presented similarly to mine.

As far as I’m concerned you’re making your life harder if you don’t:

Complicating things is counter-productive. I’m not saying it’s easy (see Blaise Pascal who said ““I have made this letter longer than usual because I lack the time to make it short” but simplicity‘s important.

One reply on “Standing out from the crowd”