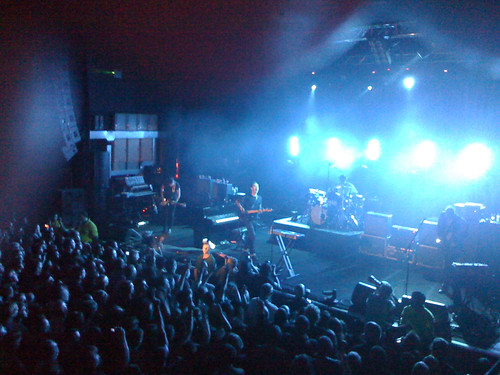 Last night I went along to the launch of the new Academy. Editors played and were good. Thanks to ace photographer Steve Gerrard for the invite. His photos will be up on Birmingham Live soon-ish and will probably be better than the one above. (Update – The Editors on Birmingham Live. There’s some good ones in there).

I was impressed by the new Academy. It feels a bit more purpose-built than the last place – there’s tiered seating on the balcony, the sound is better and Academy 2 is a vast improvement on the last version. The downstairs feels smaller but I didn’t get to explore the place too much.

I’ve had a good week of music actually. As well as Moseley Folk last weekend I saw both Tori Amos and the CBSO with conductor Andris Nelson (on separate nights) at the Symphony Hall – both were awesome.

One reply on “Editors at the new Academy, Birmingham”