Over the past month I went to 18 performances as part of International Dance Festival Birmingham. I figured I should probably write about them.

Things kicked off with Dancing the Waterways at midday – there were speeches, David Massingham flung a bottle of champers against the side of a canal barge and we (the small crowd assembled around Brindley Place) were treated to an extract from the boat-specific dance piece called Canal Work Dances.

After that I hot-footed it over to see Temperamento Español﻿ performing in Stratford-upon-Avon for United Colours of Dance Out & About. I’d see the same flamenco dancers in Utopia in Birmingham in a few weeks time.

Not a dance performance but still part of the festival, Dancing on Thin Ice was a debate on the future of public investment in the creative industries. 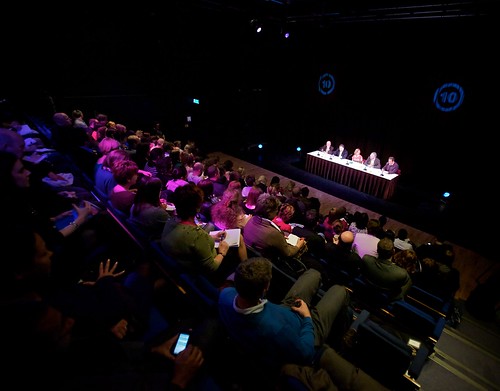 Politicians representing the various parties joined Marc Reeves and Rosie Millard. I was liveblogging this from the back so, although I was concentrating on what everyone was saying and trying to convey it to the online audience, I didn’t get much of a chance to think about the various arguments very much. The general feeling was that, with an election close, no-one was willing to give too much away.

It was all quite (too?) good-natured, although Sion Simon and Marc Reeves both tried to inject a bit of feistiness.

The ‘proper’ festival launch was just prior to Mark Morris Dance Group’s L’Allegro, il Penseroso ed il Moderato﻿. It started well, with the dancers running between each other at such speed that someone behind me gasped.

I remember that it was a beautiful production – delicate and deft movements in pastel shades – and occasionally amusing too. I enjoyed it a lot, although I was happy by the interval and the second-half, while just as good as the first, didn’t really add much more.

It occurs that, a month on, it hasn’t had much of a lasting effect on me and I’m struggling to think of much to say about it. ﻿Perhaps that’s because of the show I saw the next night.

I’d followed the development of Rosie Kay’s 5 Soldiers: The Body is the Frontline for a little while. I’d popped into the studio a few times, edited some early rehearsal footage into a 3min package and generally chatted with Rosie in the months leading up to the show’s premiere. Plenty of people were talking about how it was the show they were most looking forward to, so hopes were raised. 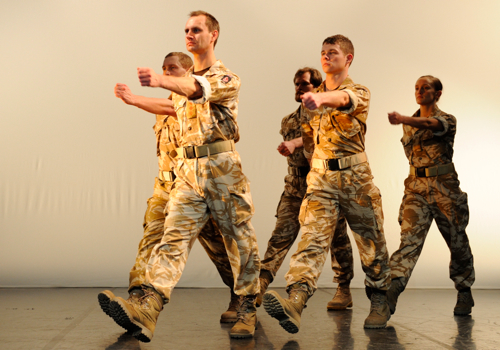 It was a good show but it took a little while to realise how good. It didn’t have the obvious and immediate prettiness of the Mark Morris piece but it was thematically rich and gave me plenty to chew on afterwards.

It didn’t seem to pass judgment on war or the soldiers that take part in it, other than to highlight the isolation of the injured soldier. In the main it was descriptive – we saw the boredom, the frustration and the excitement. Seen through Rosie’s lens, the physicality of the soldier’s life was highlighted, with practice drills, combat, grooming and nights out all having their choreography.

Actually, writing this reminds me how dense it was. We even got a sense of the soldiers’ distinct personalities and their varying relationships to the rest of the squad.

I was also impressed with the levels of extra detail that came out in the post-show talk. Even though I was privy to small parts of the show’s development, there were plenty more references – such as allusions to Michaelangelo’s The Last Judgment – that I hadn’t expected (or spotted, if I’m honest).

And that was week 1 over. Some outdoors stuff, a couple of cities visited, some prettiness and some thoughts provoked.