This was the busiest week and the one in which my jaw hit the ground more often than medical advice recommends (metaphorically speaking, obv).

Ballet Nacional de Cuba’s Magia de la Danza is selection of the company’s greatest hits, starting with a scene from Giselle that simultaneously made me look forward to Friday and reminded me of just how scary a flock of ballerinas can be.

The show was good – nicely paced, although a few dancers didn’t seem quite on their A game; there was nearly quite a bad drop and one of the ballerinas was quite noticeably straining during her solo. For all that, it’d be unfair not to mention that another dancer received gasps and applause for the length of time she held a particularly difficult position.

Carlos Acosta paid a visit during this performance too. I gather that some people weren’t best pleased that he only put in a short cameo but he didn’t need long to prove his chops. I’ve not got the vocab or level of appreciation to spot what was better about his dancing, he just seemed better.

For all that, perhaps the most impressive performance of the night was put in by Alicia Alonso, the company’s octogenarian founder, receiving the crowd’s applause at the end before going on to conduct a series of interviews and (if reports are true) stay up and put away her fair share of rum.

This was the one that I’d been looking forward to most – the teenage boy in me drawn to the Shaolin monks of Sutra﻿ before anything else. 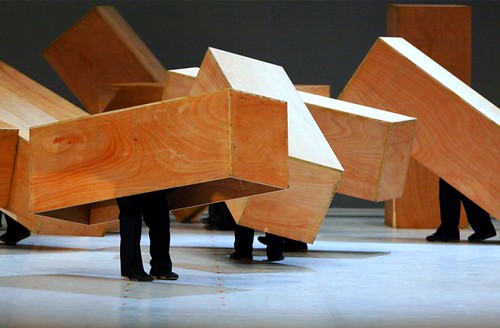 It was a great show too with ingenious use of props. If there’s a gripe then it was that I’d like to have seen more martial art tomfoolery and less furniture shifting. There was a sense that the monks were performing within themselves a certain amount – the way they lined up to cartwheel and showboat across the stage at the end showed they had some spare energy to expend﻿. It was great to see some personality in amongst that showboating too.

This was also the night that I had the strongest sense that the festival was a major event. At a reception just before the show, David Massingham pointed out that the Hippodrome and REP were both sold out, with a good crowd at the Patrick Centre too. More than 3000 people watching dance in Birmingham on a Wednesday night. Epic.

I didn’t get to see much of the Outspoken programme of dance from the Arab world but I made a point of catching the first event – a screening of a work in progress documentary, Dancing Under Crossfire, which tells the story of an Iraqi dance group made up of dancers now living in Europe. It was good to get another perspective – while we were enjoying a deluge of dance in Birmingham, Baghdad’s contemporary dance scene is apparently just about non-existent.

It might be a bit quiet, but this is a recording of Eckhard Thiemann﻿ introducing the Outspoken programme:

After Tuesday’s sneak peek it was back to the Hippodrome for Ballet Nacional de Cuba’s Giselle. None of the shakiness of the other evening, everything ran smoothly. The first half was pretty but felt a little over-long (I’ve discovered very traditional ballet isn’t really my thing) but things picked up after the interval, with a darker mood and astoundingly regimented ballerinas dancing in tight formation.

I can’t leave this one without saying Giselle shouldn’t have bothered to save Albrecht and Hilarion, who was drowned in a lake by the Wilis, didn’t deserve to be treated the way he was. Where’s the justice?

In 2008 I went to watch the big public IDFB spectacle in Victoria Square – it was probably the dance performance that made me think that dance was something I could see myself getting into. This year we had Utopia taking over the same space with an international mix of folk dances and The Destroyers. 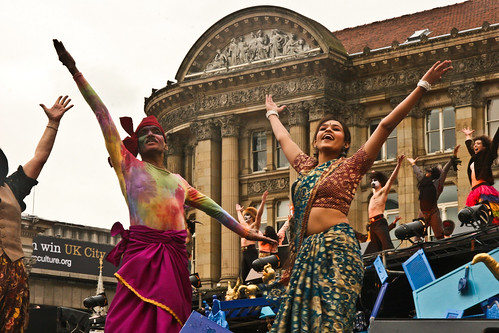 It was a great show – the band sounded ace, with Paul Murphy in his element. The rain held off (for the first performance – the evening one was cancelled) and a sizeable crowd were there to appreciate it, with the cossack dancers getting the biggest cheers.

The performers looked like they had a fantastic time too. Such was the response, it sounds like it might now be adapted for the stage. Quite right too.

Circa was on that evening at the REP. It looked interesting and had been talked up by a few people but I didn’t buy tickets until the morning of the show. By that time there were only a handful left. I was so glad I didn’t miss out on it.

I’m not sure what to say about this one. In purely descriptive terms it was a mix of circus skills, sports acrobatics, gymnastics, contemporary dance and breakdancing.

That doesn’t quite cover it though. The things those people did on stage defied belief. The audience was the noisiest I encountered but that was no-one’s fault – we’re talking gasps, squeals, laughs of disbelief, outbreaks of applause… that kind of thing.

And you can watch the whole thing here: