Last night I got to enjoy Stan’s Cafe‘s new production, Tuning Out with Radio Z, from a fairly unique perspective. I say fairly unique because there were four others who were tucked up in beds arranged around the stage at the mac. 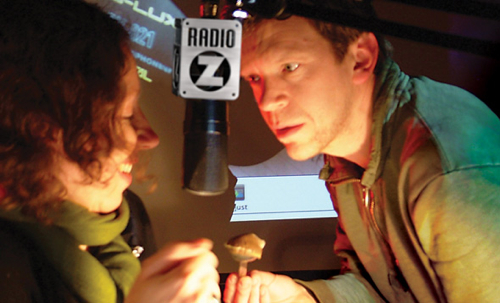 It was a strange experience.

We took our positions 10 minutes before the doors to the theatre opened and only got up after the audience left, so I’ve no idea how many people were there watching.

I didn’t get to see any of the action on stage from where I was lying and, when I was told I could get up, I was surprised there was that much paraphernalia lying around.

Without the visual part of the show it was like listening to 4 hours of Blue Jam.

Although the focus is on two radio show presenters, reality and perspective slides sideways and backwards quite regularly. It was smoothly conveyed through speech and, the more I think about how they achieved the effect, the more impressive it seems.

The music was really good – I particularly enjoyed a bit of Spiritualized and will be digging out Ladies and Gentlemen We Are Floating In Space soonish. They played my fave Girls Aloud tune too.

We weren’t given much direction or told what to expect, or at least no-one told me anything other than to lie down and look asleep. When Craig dashed over to me and started shouting questions in my ear – “Can you hear me? Can you open your eyes? Blink if you can hear me” – I was a tad surprised and not sure how to react. I figured the safest thing would be to not react. Good choice, I reckon.

There was a part where. I gather, we sleeping forms were non-responsive patients in a hospital. There was an extended period of no action on stage and I shifted slightly, making Craig run over, all hopeful that I could be roused. I wonder if they were waiting for one of us to move or if he just improvised around that.

As for what the show was about, I’m not sure. It was an improvised performance that took the theme (that night) of ‘shooting’. Things or people being missing provided a major thread – opportunities not taken, the shock of people being taken and events happening in other places. The story of Orpheus and Eurydice was told with small alterations.

Gemma Thomas, who was in the audience, said that she was moved more than expected by the last hour.

Ah, I’ve just found the tracklisting online via the joy of the Stan’s Cafe Last.fm account. I was there from Donna Summer onwards.

One reply on “Last night I couldn’t sleep”