More Hide and Seek-related stuff. They’re being terribly interesting at the moment.

I went down to their Weekender thing at the National Theatre on Sunday. It was part of LIFT, itself interesting because Mark Ball (who founded Fierce and was there when I worked for them a couple of years back), seems to have given the festival a kick up the arse in the best way.

One of the things we saw was a huge game of pass the parcel. Huge to the extent that in the early stages the players had to circle the parcel, rather than it being passed around. 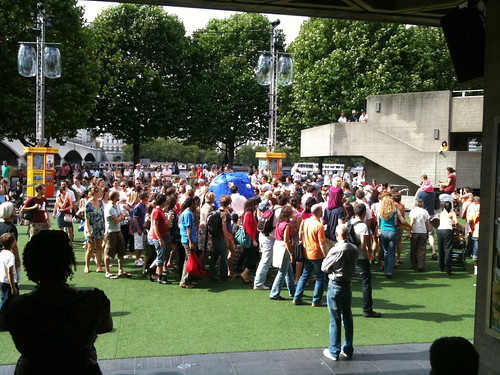 The two people who facilitated the game were fascinating to watch – keeping the game ticking along at a decent but unrushed pace, getting people involved and leaving them to their own devices. Carefully cultivated chaos broke out as the layers came off and the area became strewn with balloons, feathers, wrapping paper, bubble wrap and all sorts of other bits and bobs.

It was fascinating to see side-games springing up all over the place too. Some provoked directly by the facilitators, some not (although in most cases they’d still provided the platform/materials for them to take place).

It’s something raised by Tassos Stevens as part of his contribution to H&S’s WonderLab:

Try to be a theatre director of any scene of people in play and you discover many games tumbling out at once – games of status, of desire, of curiosity, of connection, and of greed, of all the sins and of all the virtues – plus hope – and as an actor here you can’t stop still, moment by moment a different game crackles into life. And in reality, these games are all being played all at once: by different people at different times in different places, interrupting and overlapping

One reply on “Many games”