I came across two things this week that made me think thoughts. Not that I’ve come to any conclusions, but I’m posting this in case the process makes me come to any.

Which is, in its own words:

a real garden that feeds on social interaction. The more you talk to me, the more I grow! 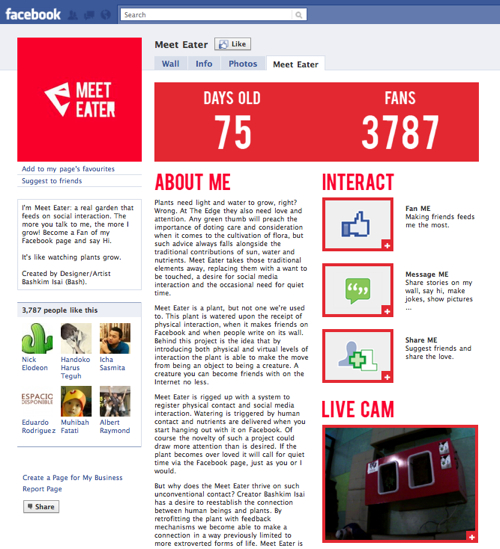 Essentially it’s a plant that is hooked up to a system that will detect physical interactions and social media activity. Stroke it and it’ll get watered. Become a fan of the Facebook page and send it messages and it’ll receive nutrients.

What interests me about this is the way that the means of communication is filtered (the plant can ask for quiet time and protest about too much watering) and the idea that simply by communication becoming a two-way stream an object can be imbued with a personality to which one might form an attachment.

There’s something about dependency to figure in here too.

A devious little game that, at the time of writing, is temporarily (I hope) unavailable. It’s a bit like a collaborative musical chairs, in a way. 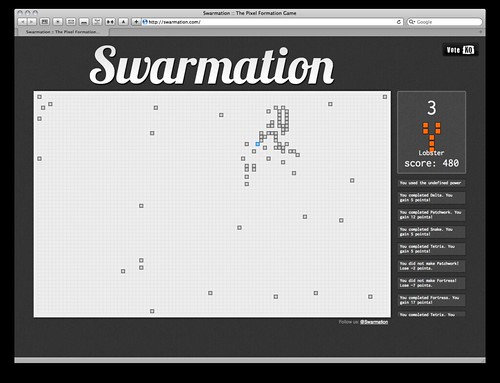 The idea is that you control a pixel and have to arrange yourself, along with all the other people controlling their own single pixels, into various formations. If you manage to be part of a formation when the clock runs down you receive points. There’s no effective means of communication (and therefore coordination) between you and the other players.

Groups formed in order to make formations, became successful and then unwieldy before splitting. Formations came together well before the deadline, leaving stray pixels zooming around the screen looking for somewhere to settle (or a crowd to be ‘in’ with).

Decisions had to be made about when to flee a sinking ship and seek fortune (and points) elsewhere. Unlike with Meet Eater, a clump of pixels had no physical form to be attached to so connections were ephemeral, loose and only maintained as long as everyone’s self-interest was served.

None yet. Just a bit more food for thought.