I’ve been looking after Created in Birmingham for a while now. ‘Looking after’ being an odd but instinctive way of describing it. I didn’t set the site up, it wasn’t my idea in the first place and after my first stint I handed it on to someone else. Nevertheless, I’ve now been running CiB for over half its lifetime.

I’ve been having a bit of a think recently about what the site is, what is does and what I might do with it. The following is an unfinished chunk of that thinking.

Where CiB is at

Since it started almost five years ago, things have changed. It was set up to do a job and prove a point – that there’s plenty of interesting stuff going on in Birmingham and that a good way to show that off would be to spend pennies on the website and invest in the editorial. It worked although I don’t think enough people have taken the lessons on board yet.

Job done, then. From here on, anything else is a bonus.

In its first days there was funding available so time could be set aside for it. I think that was pretty much vital for getting it established but it’s had a life beyond that. Depending on your point of view, CiB is now either a hobby that I do in my spare time or it’s subsidised by my employer, Made Media. It’s probably most accurate to say that it’s a bit of both.

Thing is, quite a lot of people don’t treat it like it’s my hobby. That’s fine and I certainly don’t mind being asked to attend shows, launches, press calls, backstage tours, to give advice, do pro bono work and have chats over cups of coffee.

I’d love to do all of that but I can’t, interested as I am and no matter how much it might benefit me/them/others. I can only do what I can within the limits of my own spare time and interest/energy levels. At the moment I’m trying to manage peoples expectations of what I can do. (Side note to marketing/PR types – your time for that kind of thing tends to be paid for, mine’s not).

That all sounds a bit woe-is-me. It’s not meant to, but I think it points towards an appetite for something that CiB can’t currently fulfil.

This also ties in with something else I’m quite mindful of. Jon quite rightly pointed out that CiB is more preview than review. He’s right but I don’t think that’s a bad thing if a balance is kept.  I want to give context, tie things together, host discussions around important points and occasionally just point at things and say ‘look at that’. CiB has to be more than just an inefficient listings website.

A related pointed is that CiB is less exploratory than when I ran the site the first time round – in that I don’t discover things that are totally new to me so much – and that’s just because I know the landscape a lot better now.

CiB used to be an outsider’s view of the arts and culture scenes in Birmingham and that’s an interesting position to take. I’m not quite such an outsider to it these days. It means I’m able to give more context and background but I don’t tend to explain things so well to those who are less familiar with things.

Where our audience is at

CiB’s audience is more scattered than it used to be. Our web traffic dropped by two thirds between my two stints and has stayed roughly around that level. However, we’ve got 1500ish RSS subscribers (on a good day) and a currently dormant mailing list with 1200 people on it.

The main difference, which may well account for that dip in website traffic, is that we have 3900 followers on Twitter and 3400 on Facebook. A large chunk of people are getting their info via those social networks, not that we use those channels as well as we could or that each update/tweet reaches anything like the full extent of those audiences.

Point being that there’s plenty of ways for people to get their arts/culture news online and although the CiB blog underpins our activity it’s not the preferred/usual point of consumption for many.

Side note: I know this sounds very ‘push/broadcast’ and that social media is meant to be “all about the conversation, man”. Spout that rubbish at me and I’ll come at you with a brick.

This is the thing that got me writing this post. On 2 June I wanted to write a post but was struggling for something to write about. It occurred to me that there was plenty on Twitter I could dip into.

So, what I did was I embedded Storify in a post and occasionally pulled notable tweets into it. I billed it as ‘A day in the life of a creative city’. 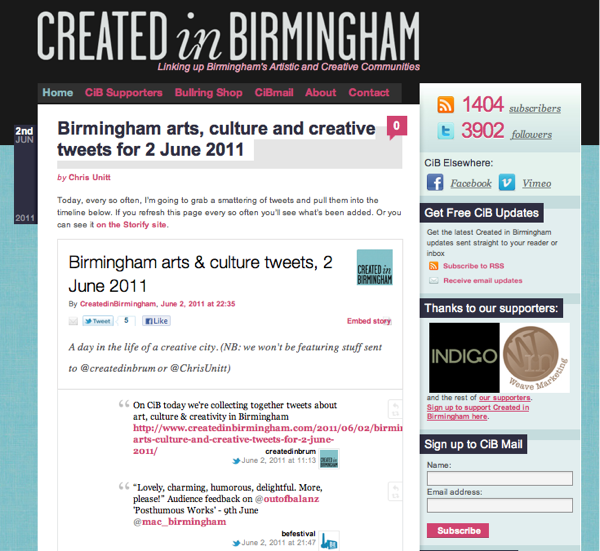 We got what I expected we’d get: news, announcements, whimsy, pictures, self-promotion, requests for help, peeks behind the scenes and people talking about shows they’d seen the night before. There was more there than I could ever cover in a month of blogging and I thought it was great.

What my Twitter/Storify experiment showed is that ‘everyone’ is publishing their own information now – with varying degrees of dedication and to varying audiences.

And when I say ‘everyone’ I mean the the full-time artists and the aspiring part-timers, the marketing teams and the audiences. That last one’s perhaps most interesting. In many cases they won’t be tweeting exclusively about art and culture in Birmingham but it was possible for me to draw a line around all of those things.

I acted as an aggregator (not, for goodness sake, a curator), applying a bit of an editorial steer by picking the stuff I wanted to make its way onto my website.

Given all of this, what’s the point of CiB?

Pete always said that if CiB ‘worked’ then many more people would copy it. He said something along the lines of:

when there are 100 CiB’s, CiB will have done its job and won’t be needed any more

So everyone’s publishing arts and culture information online in Birmingham now. Everyone’s in a position to subscribe to the stuff that they find interesting. What’s the point of CiB? Have we reached the point that Pete was talking about?

Twitter’s great in many ways but it’s limited in its format, demographics and transcience. Finding all that information amidst the general noise of Twitter’s not that easy either. Widening things to all the other blogs and social networks, how many people will want to roll their own arts and culture news service?

People gravitate to established, trusted sources of information. CiB provides that. It’s been around long enough to collect people. It has a history. Having asked around, it seems it’s different things to different people:

And all sorts of other things. So again, what should CiB do? Should it look to record and amplify the information published by others around the city? Should it be another (albeit probably slightly louder) voice amongst many? Should we try to cover things that nobody else will have access to? Should we scale up to better serve the organisations around town that are looking for an outlet for all their stuff?

Or should I really not stress it and treat it as a little blog that I use to talk about interesting arts/culture things in Birmingham and leave it at that?

Two things really. It’s CiB’s 5th birthday towards the end of this year and I know Pete’s been thinking about the effect the site has had in that time. He’ll approach and digest that thinking in his own way and I’m sure that’ll be really interesting to read.

For my part, I’m looking at how CiB can evolve into something a bit different. Maybe a bit bigger. I think it’s moved past the role it played in its early years and it needs to do something different – not better, just different.

Like I say, these are just some fairly unformed thoughts that point the way to the kind of things I’ve been thinking about. Any input from anyone would be gratefully received.

Consider this the DVD extras. Here’s some other stuff about CiB which has figured into my thinking: