A report called ‘Supporting growth in the arts economy‘ has just been released by Arts Council England. The cover looks a bit like this: 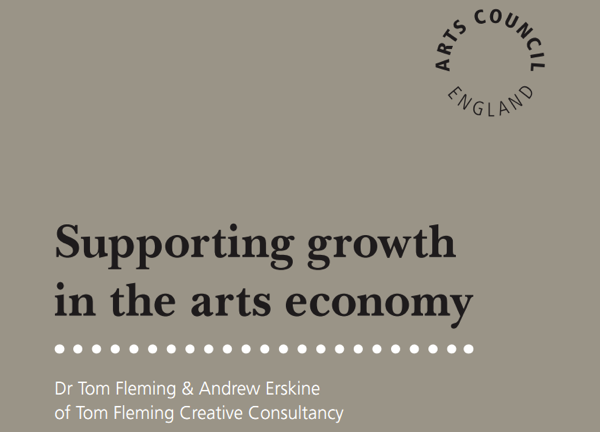 The report brings together three papers and the second in particular, titled ‘Place infrastructure and digital‘, has some interesting observations. Here are a few of them in no particular order with a couple of asides from me:

it is also easy to overstate the true impact of digital technology on the traditional arts, from the perspective of creators and audiences alike. For most arts organisations (and certainly most of those who are about to become Arts Council national portfolio organisations) digital has not yet fundamentally altered the way their core practice or business model. Virtually all will have an online presence for information and ticket purchasing and most will use social networking tools in marketing, but relatively few will be using digital technology to anything like its full potential.

For that matter, there are still plenty of organisations being sold duff websites and ticketing systems. The bit about using digital to its full potential made me think there’s probably some interesting work to be done about how ‘digital’ permeates organisations. What are the ways in? Who teaches who? From where and at what stages does external assistance (from peers, funding bodies, commercial agencies) come in to this? Someone must be up for drawing some diagrams.

Digital technology has also, thus far, been far from disruptive in introducing new types of revenue generation and business model – such as exploiting intellectual property or monetising content in new ways.

The report mentions crowdfunding later on but I think it’s fair to say that this is still a developing area. Actually, this came up in a round table discussion I hosted last week – lots of people from arts organisations were interested in how they might use social media to make money but nobody knew how that might work.

arts organisations and audiences are only at the start of a journey, with digital engagement very much still supplementing, rather than replacing live experiences. This work describes a pyramid of engagement for audiences. At the bottom, audiences simply access information via digital technology; at the top audiences and artists co-create new works and meaning.

I think I might be of the opinion that the organisations that use digital technology to do that top-of-pyramid artistic co-creation will find that the stuff lower down the pyramid comes much more naturally and perhaps even as a side-effect of the other work they’re doing. I reckon there’s some sort of trickle-down effect there. Or something. I’m still mulling this one over and there’s possibly a bigger post on this brewing. Maybe even a diagram.

Contemporary dance, more than theatre or opera, has tended to engage more with the possibilities of digital experimentation at the level of content creation, reflecting the youthful audience for the medium but also the way that dance naturally works in conjunction with other artforms

<cough>5soldiers.co.uk</cough>. Although I dunno, there’s been quite of lot of interesting theatrical/digital stuff. I’m not sure what the basis for this comparison is.

Social media and audiences: Reaching wider audiences will continue to mean using social media in a smart, sophisticated way. Keeping arts organisations and artists at the cutting-edge will become even more critical in times of limited funding

Yes. Good to see this is listed as the first of five ‘critical influencing factors the Arts Council will need to consider’ too. To some extent it sounds like there’s a bit of an arms-race mentality here in trying to stay at the cutting edge. There’s no harm in many arts organisations following closely behind in the slipstream,

However, it is important here and across the arts and creative economy, not to overplay the significance of digitalisation. It should be seen as a disruptive force and enabler that has accelerated processes of artistic development, pierced many previously impermeable boundaries, and necessitated radical reform in business modelling, operational structure and the relationships between producer and consumer, artist and audience, art and economy. But it is just a technology. Of far greater significance has been the response to this (and other) technologies and the effectiveness of arts organisations in mainstreaming new technologies to redraw the boundaries of their practice, realign relationships with audiences, and redesign the business models. This is as much about leadership, vision, confidence, and establishing a relationship with the audience (that is, the market), where to stand still is to fail.

There’s more to delve into in the report and I’ve just scratched the surface, so have a flick through. It’s only 100 or so pages but what struck me was that, for a not-specifically-digital report, a search of the word shows 199 results for digital (or digitalisation).

Thanks to BOP Consulting for flagging up the release of this report. Their website’s worth subscribing to if you’re interested in this sort of thing.

One reply on “Supporting growth in the arts economy”