A few years ago I worked from my spare room. I don’t venture in there so much these days but, on a rare sortie recently, I noticed that the calendar on the wall was from 2008. 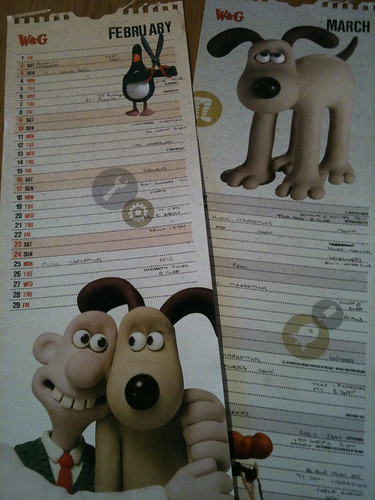 Not wanting to miss the chance for some procrastination, I stopped to have a flip through. Looking back, Feb and March of that year were fairly pivotal months.

I was reviewing a lot of gigs for Culturedeluxe and Birmingham Live around this time. I saw and then scribbled things about Palladium and Alphabeat, the NME tour, Los Campesinos, Gallows, Cut Off Your Hands, Eels and Sarabeth Tucek.

The Cut Off Your Hands gig was at the old Barfly. It was empty and absolutely freezing but I did get to meet and spend the evening hanging out with Lee Allen.

I also went on a music marketing course run by Punch Records. I was helping to run Culturedeluxe’s spin-off record label so I thought it might be handy. Mylz from Heducation was one of the speakers on that and I’ve bumped into him a fair few times since.

On the 18th I went along to the second ever Birmingham Bloggers meet-up. Not that I had an interestingly active blog of my own (although I’d dabbled a fair bit previously) but because Steve Gerrard said he’d be down there and I’d just done my first Birmingham Live review (the Gallows one) for his site.

I nearly turned around and went home halfway there but was glad I didn’t. The first two people I met when I walked in were Jon Bounds and Nick Booth. Jon gave me a BiNS badge. I also met Antonio Roberts, Pete Ashton (who later noted my height and keenness), Stef Lewandowski, Julia Gilbert and Joanna Geary.

At the end of the month Pete posted about a job going with the Fierce Festival. I got in touch and, later that day, I was on board. The website developers (who I probably met in March) were Made Media, of all people.

More music reviews. This month it was Tina Dico, MGMT, Laura Marling, The Levellers, Envy & Other Sins (where I met Frankie Ward for the first time), Duffy, Foals and Infadels. I’m not quite sure where I found the time for all of those.

On Saturday the 22th I went for an interview with Mediasnackers in Bristol. They were after some trainers to pull into projects from time to time. I didn’t get picked straight away but I stayed in touch with DK and have enjoyed delivering a few gigs with them over the past couple of years.

I went to a conference at Alton Towers too (didn’t go on any rides) and met Ruth Pipkin (or Ward, as she was then) for the first time. The conference was to do with a project called Ideas For Life – something I would work on for a few weeks at Maverick Television later in the year.

At the end of the month there were another couple of blogger meet-ups, including an impromptu one on 28 March at the Spotted Dog. Nick Booth has written about it and I wouldn’t be surprised if that was when I first met (or at least became aware of) Nicky Getgood.

I won’t go into a big old history lesson but blimey, a lot of good seeds were sown in February and March 2008.