I’ve talked about trailers for theatre before but a post about The rise of the ‘digital theatre’ over on A Younger Theatre has prodded me into getting all specific.

By way of background, Headlong Theatre have released a short film showcasing their upcoming season:

For added context there’s a piece in The Guardian with quotes from Rupert Goold, the company’s artistic director, and some clarification from Henny Finch, Headlong’s executive producer, in the comments.

The video has caused quite a stir on Twitter, with a heated debate about whether a theatre company should invest in film-like trailers for their productions. Is it an investment or a waste of money that could go into a production? Is it taking away from theatre as a live element? Is it wrong to call it a trailer – is this too close to film, and thus, what language can we use for when theatre explores theatrical work in new mediums such as videos?

Now, I have to point out that I’m looking at this from the point of view of it being a promotional tool, so I’m mainly interested in its potential to:

If we wanted to critique the film as a cinematic work in its own right then different criteria would apply. However, even if it’s taken as purely an artistic work, a lot of what I’m going to cover in this post will still be relevant.

It’s important to remember the crucial difference between an audience in a cinema and an audience online – if someone is at a computer they can click away whenever they like. In fact, YouTube gives users pretty good stats on audience retention.

This means that from the moment the video starts you’re going to start losing viewers right through until the end. Therefore the last few seconds (which is traditionally where people put the most important information) is the point where there are the least viewers.

At 4mins 48s this video is relatively long. I’m not saying that people won’t sit and watch a video of that length, but typically you’ll get more views and more shares with shorter videos. 30 seconds is good. If Headlong are keen to impart a message with this video then they’re giving viewers all the time in the world to avoid seeing it.

Speaking of the message, if I watched this and didn’t know that Headlong was a theatre company would I be able to work that out? Is there any clue that the words above the actors’ heads relate to plays that I could go and see? Where can I see those plays? When? Can anybody read that URL at the very end?

The video doesn’t give much of a clue to any of this, which isn’t fatal because you can add that stuff in the description area under the video on YouTube…

Once you’ve put a video on YouTube you should do your best to make the video as discoverable as possible. Once people have found the video you should give people the chance (or straight up tell them) to find out more.

The thing to remember is that YouTube/Google can’t watch the video and work out what it’s about – you need to help out by providing descriptive titles, descriptions and tags. The better job you do of this, the more likely it is that people will be able to find your video.

In the case of the Headlong film, some steps have been taken but there’s more to do. In short:

While we’re at it, the description and annotations could remind me to hit ‘like’, leave a comment, subscribe to your channel or share the video with others. I’m more likely to do these things if I’m reminded to (or told to).

Rather than go on at any more length, I’ll link to a recent post from Kissmetrics on YouTube video optimisation. And here’s an annotated screenshot for you: 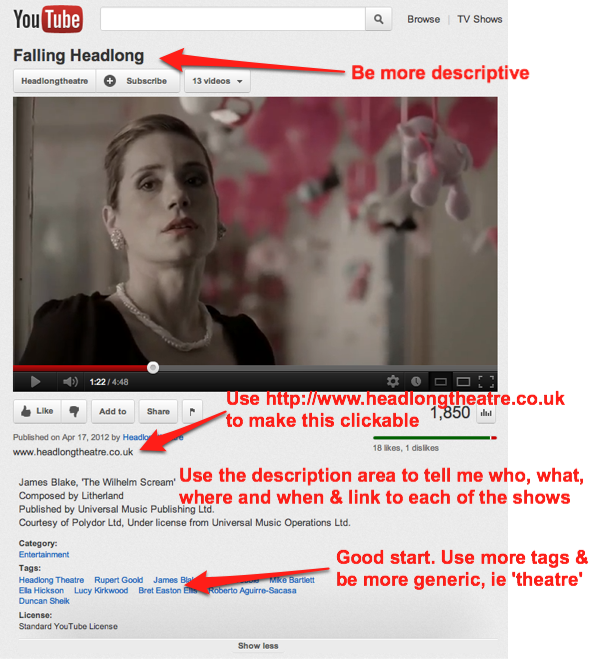 The film on other websites

The great thing about YouTube videos is they can be embedded on other websites (like this one) as well as on Facebook, Twitter.com and others. That means they’re stripped of the context that YouTube can provide (all that stuff above). That means they need to be able to stand alone as much as possible.

I’m not sure whether Headlong are on the YouTube nonprofit partner programme. If they’re not they should be.

Beyond that, Headlong seem to be using YouTube as a video hosting platform, rather than making use of the various social features that it has. That’s fair enough but I’d guess that’s the reason they only have 15 subscribers. I’d quote Maya Gabrielle (digital producer, National Theatre) from an event last year:

If you’ve made a beautiful piece of content but not created an audience for it, you’ve wasted your money

But then there are very few organisations out there that have used YouTube to build an audience for video. For the tactics used by the pros, have a look at what Bo Burnham, Jake & Amir, Jenna Marbles, Hannah Hart and any number of others do.

In case anyone from Headlong happens to read this, I don’t mean to pick on you – this stuff is common to pretty much every arts organisation out there. I usually get paid to provide this kind of advice, so I hope this is of some use.

More generally though, if you’re making trailers to be shown in front of a captive theatre/cinema audience then by all means follow the established conventions for that format.

Otherwise, if you’re making films to be shown online then please recognise that you’re dealing with something rather different and consider how and why your film might work better if it played to the strengths of the format.

UPDATE – there’s been loads written on this subject from others taking all sorts of different perspectives. In particualr, Postcards from the Gods, BURNTarts and both Lyn Gardner and Matt Trueman in the Guardian. Thanks to everyone who linked to this post.