Arts organisations are increasingly producing (or being pushed by funders to produce) more and more professional video content. For the next post in the Arts Analytics series I’m looking at how some of the larger funded organisations are using YouTube.

As you’ll see in the table below, there’s a massive disparity, with a small number of organisations hauling those averages up. In fact, outside of the top 20 or so there’s not a lot going on.

Here’s the data, collected on 13 April 2013 and sorted by subscribers.

What this tells us

Well, although pretty much everyone is on YouTube, I get the impression that the majority of organisations aren’t putting much effort into building up their presence there. There’s little rhyme or reason as to what they upload and their accounts are mostly used as public repositories for video content.

Which is fine, of course. It’s a perfectly legitimate use of YouTube, it’s just unlikely to result in a great many views or subscribers (if people took that approach to Twitter there’d be uproar). I have two caveats to throw in here:

It’s pretty notable that the Royal Opera House and ENO top the charts. Both have produced content specifically for YouTube – ROH with their live day-long broadcasts and ENO with their ‘social networks in real life’ video. Those are still hit-and-run approaches to online video, but they’re interesting.

By the way, I’ve also added a column to show what percentage of an organisation’s total views are accounted for by their most popular video.  This shows us which organisations (looking at ENO, Fact, Royal Philharmonic Orchestra, Crafts Council and Serpentine Gallery) have scored most of their views from one stand-out video.

The figures I’ve pulled out give a broad state-of-the-sector overview. For my money, if you’re ‘doing YouTube’ on a regular basis then there are two main things to pay attention to:

The first will vary depending on the organisation and the type of video. It’s a massive topic and one I’m not going to get into here except to say that you should at least know what visitors from YouTube tend to do on your site. You should also (much more importantly, from what I’ve seen) know how to judge whether embedding a video on a page makes any difference to things like conversion rates.

It’s also well worth pointing out that this is information I don’t have access to. I may make slightly disparaging remarks but for all I know things could be working out just fine for everyone.

The second is very simple: subscribers = views. To quote the National Theatre’s Maya Gabrielle (as I always do on this topic):

If you’ve made a beautiful piece of content but not created an audience for it, you’ve wasted your money

So if you’re going to keep producing video then build up those subscribers.

The new YouTube One Channel layout and approach is interesting – it’s nudging people to consider their YouTube channels as a hub for ongoing interaction with audiences. They put subscriber numbers front and centre and give channel owners a chance to ‘sell’ their channel to non-subscribers. For a good example of how this works, check out the pros like Charlie McDonnell or even Jamie Oliver. 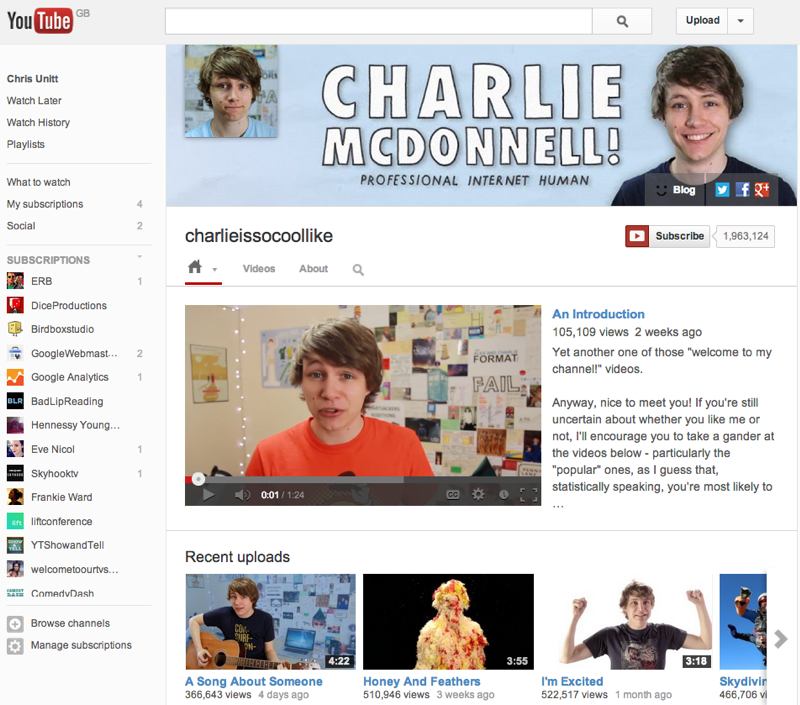 It’s always interesting to see what you can learn from the real pros. In this case, it’s the people who have figured out how to master YouTube for fun a profit. A recent Guardian article profiled some of the rising stars and this stood out:

YouTubers – those who make content specifically for the platform – will often compare the process to theatre or playing music live, more than to producing a television segment.

Something to think about.

Others must have some good tips for YouTube – what would you recommend?

A few hours after I published this, there was a post on the Google NonProfits Blog called Anaheim Ballet performs on a global stage. It’s about how the company has used YouTube to reach more people:

In their YouTube videos, Anaheim Ballet created a discussion with their viewers by asking questions and seeing responses in real time.

You can tell it worked for them, because when they didn’t post anything for a few months people asked when they’d be posting more – see the comments on this video. How often do you see that?

What’s also interesting is that their most popular video is six-years old and titled Ballet: Dancers. It happens to be the #1 result in Google for the phrase ‘ballet dancers’ and so far has over 11m views. I didn’t want to talk about SEO in this post, but video tends to do well in search these days.

This post is part of a series called Arts Analytics where I’m using digital metrics to see what a group of arts organisations are doing online. Sign up to the Arts Analytics email for more of the same.