At Museums and the Web 2012 last month, Elena Villaespesa and Tijana Tasich presented a paper called Making Sense of Numbers: A Journey of Spreading the Analytics Culture at Tate. It’s online now and bears repeated reading. There are slides too, although (pretty as they are) they don’t have the same amount of detail.

The paper is a case study, not a how to guide, and not all of it will be applicable to the requirements and operations of other organisations. However, it gives a good top-level account of how Tate are going about implementing this part of their digital strategy.

Importantly, the principles, techniques and tools they’re using are well within the reach of most other organisations. That means that the ‘oh well, they’re Tate and have more resources than us’ excuse goes out the window.

On the tools front, they mention Hootsuite, Adwords, Google Analytics, Facebook Insights, their ticketing system and YouTube analytics. They’re not using scary and expensive enterprise stuff, which just emphasises that it’s what you do with it all that counts. To quote from the paper itself:

The information and the tools to capture the required information are widely available, but museums need to take a more mature and outward–looking approach to analytics, one that is led by their genuine wish to delivering an ultimate experience to their users

The thing I liked the most…

…is the fact that they shared this: 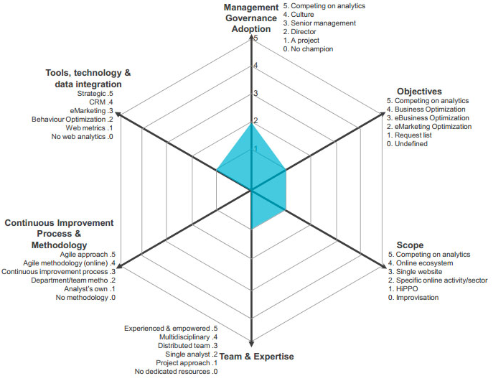 If you’ve not come across it before, it’s Stephane Hamel’s online analytics maturity model. That blue area shows Tate’s position in 2010 before they started  working on developing this analytics culture – there was no strategy, no-one taking responsibility for analytics, no dedicated resource and only patchy reporting of top-level web metrics.

In short, they were in exactly the same position as most other arts organisations.

I use the same model when I start working with people on their use of analytics and data (or their digital strategy ore generally). It’s not 100% applicable to financially stretched arts orgs but it’s nonetheless very useful for context – giving an idea of where they stand and how they should be progressing.

Having used it a few times, I can say with some confidence (and without outing any one client) that the situation shown in that diagram is an absolutely typical starting point. It’s also nothing to worry or be ashamed about (as long as plans are being made for improvement). Now that this paper has been published I’ve got something to point to and say ‘Look, see? Tate were in exactly the same position you’re  in’. I’m hugely grateful for their openness.

Having said that the principles, techniques and tools are within everybody’s grasp, the fact that this stuff isn’t standard practice by now is profoundly frustrating. As someone who dearly wants arts organisations to understand their audiences, make smarter decisions, reach more people and bring in more money (so they can do more and better work) it chews at me a bit.

It’s 2012. This stuff has been around long enough now, so why haven’t people been picking up on it? Well, I go back to the point I always make about the arts sector talking to/about itself too much – a few more ‘outsiders’ speaking at conferences might be a good start.

I also liked this answer from Jason Falls of Social Media Explorer when he was asked who the highest offenders are in social media. He pointed the finger at:

Anyone who is still peddling the “Join the Conversation” spiel without following it up with how to connect all the fluff with business drivers, measurement, and knowing what you’re getting in return

I’m looking beyond just social media with this, but he’s quite right.

While we’re at it, check out the slides from the Clicks That Count session presented by the Smithsonian’s Brian Alpert. Also,there are quite a few round-ups from Museums and the Web but this one from Claire Ross and this from Robin Dowden at the Walker Art Centre are both good.