Let’s kick this off with Aram Bartholl’s Online Gallery Playset. 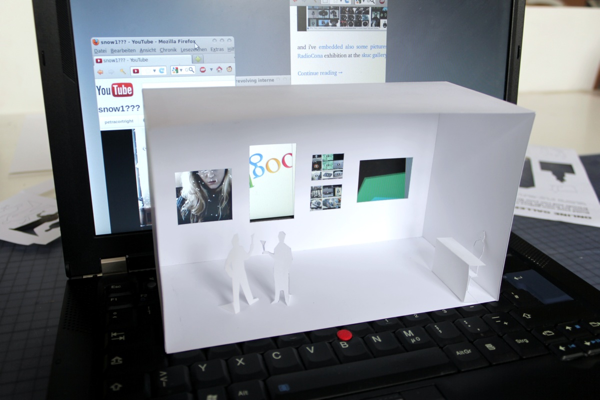 The Digital Museum is a (roughly weekly) email newsletter from Tate’s John Stack with lots of lovely links to digital media and emerging technologies in museums, art galleries and archives. That, along with You’ve Cott Mail and the weekly ArtsJournal round-up, should be about all you need to stay up to date.

“people will be able to create their own avatar and have it dance on the screen with Usher,” said Hamish Hamilton, who will be directing the concert broadcast. In addition to the virtual dance squad (which will appear with Usher when he performs his song “Scream”), Mr. Hamilton said, the show will also incorporate live tweeting from the audience and a real-time camera feed from his director’s booth, where, he said, “you can hear all the people in control, or not, as the case may be.”

I like the sense that you get from the article that they’re trying things out (and very publicly, at that) without knowing for sure how well/if it’ll all work. Good luck to em.

A few lists of digital projects that have received funding:

A paper about New Approaches in Digital Publishing from the Museums and the Web conference looks at “the practical and theoretical implications of developing online publishing projects through disparate approaches while making an argument for institutionally-generated publications as a valuable means of engaging wider audiences”. Which, just because it’s a very long sentence, doesn’t mean it isn’t a good one.

That paper’s worth tying to this article about Why Publishers Don’t Like Apps. At least it is in my head, because I’ve been looking into this stuff a little more deeply recently at work. This bit jumped out:

Wired, the most digital of Condé Nast’s titles, has 33,237 digital replica subscriptions, representing just 4.1 percent of total circulation, and 7,004 digital single-copy sales, which is 0.8 percent of paid circulation, according to ABC

On a semi-related note, I hadn’t noticed how interesting Google Currents is. Can’t see it lasting too long though.

I liked the sentiment expressed in Richard Dare’s article titled Pride & Prejudice: (What) Can Nonprofits Learn From the For-Profit World?:

suggesting to the nonprofit sector they might learn something by studying the habits of their for-profit brethren is a bit like suggesting a priest might want to learn something from a rock and roll promoter. It upsets people. But who knows? Maybe the priest should take a gander at the fellow in the next auditorium.

I once sat in a room biting my tongue while someone who should really have known better told a group of museum professionals that (and I quote) ‘agencies are evil’. That article’s a much better starting point for a more constructive conversation.

I liked the idea of The Underground Book Club, a free magazine for commuters in London which showcases the first three chapters of three books for commuters to read on their journey. App please?

Olympic Athletes is a social media hub for the various athletes’ social media accounts. It’s been nicely done, although I’m sure I heard the athletes have been given some fairly strict guidelines about what they can and can’t publish. While we’re talking Olympics, Perfect Curve’s Siobhan Sharpe is on Twitter.

The print vs online arts coverage conversation has been going on at some length for a little while now. A Mark Shenton blog post had a couple of quotes that captured the essence of my thoughts on this. Firstly from Mark, summarising a point made by Catherine Love in the Guardian:

In effect, the bloggers at the moment are therefore just doing more of the same that the dinosaurs of print are doing

and, from Catherine Love herself in the comments:

Yes, and the same applies to so many other things. It kinda feels like I’m seeing the same lessons being learned industry-by-industry. It’s good to see a few people trying different things (after all this time).

To round things off:

The roots of social media can be traced back to Roman times. Indeed, before the emergence of technologies of mass dissemination in the 19th century most media was in fact social and participatory in nature. It’s the past 170 years, during which social media were overshadowed by centralised mass media, that is the real anomaly in historical terms. The rise of social media in the internet era is thus, in many ways, a return to the traditional way of doing things

I quite liked this advert for the Orchestre Philharmonique de Luxembourg.

I’m not sure why I liked it so much. Maybe it’s because once you get past the quirk the heart of the message is just very simple, straightforward and compelling and doesn’t need dressing up with yoof speak, booze or ninjas (let alone being made desperately playful! and immersive! and innovative!).