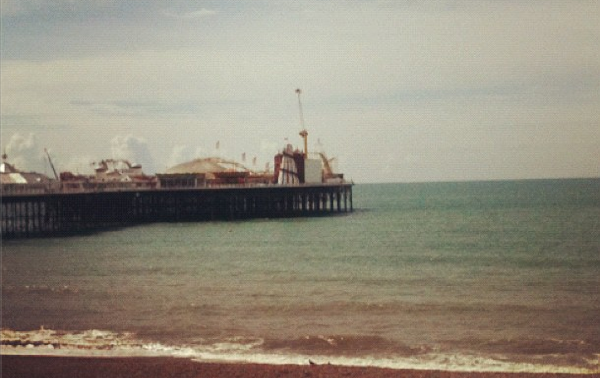 This week I spent a couple of days down in Brighton at the Arts Marketing Association Conference. It’s an annual event that brings together a few hundred people involved in the promotion of arts and culture and it was the second time I’d been. The pic above was taken in a rare sunny(ish) moment.

I go along to the this conference because it’s useful for me to know more about the kind of things that arts marketers are dealing with and what sorts of trends are emerging. Plus quite a few clients go along – this year, by my count, about 10% of the organisations represented were ones we’ve recently worked with or for.

I won’t regurgitate notes from all of the sessions, but here are a few bits that stood out…

William Norris from the Orchestra of the Age of Enlightenment

OAE’s marketing was mentioned in a few sessions at the conference. They’ve done a very good job on The Night Shift, repackaging classical music to present it in a more contemporary context and attracting what they would consider to be a non-traditional audience. They’re doing something different again with The Works.

By way of background, William read some of this post from properdiscord.com. It nicely exposes the weirdness of the usual concert-going experience and is a good example of what you might call breaking normal. He made the point that long lists of musicians and composers can be a turn-off unless you’ve already heard of them – something that nightclub flyers do too.

One of my favourite ‘what if’s is: what if nightclub promoters were to bring their marketing techniques over to the cultural sector? OAE are going part of the way to answering that.

William made the point that you have to look at what surrounds the art – language, habits, rules, etc – and change them to suit the audience you want to attract. Erica started her talk with a provocation that tied in quite well with that. She asked:

Is the way we communicate about culture doing more harm than good?

The work being done by the NewcastleGateshead Cultural Venues partnership looked interesting.

Ryan talked about shifting interactions between the museum and its visitors from transactional to relational.

That’s the kind of thinking that sits behind their @analogtweet project and the 50/50 exhibition, with the public voting for the contents of that exhibition using kiosks placed during the previous show. It also explains the form of their new website, which has been held up as an example for others to follow (something I’m sceptical about, but I won’t get into here).

We were asked to keep the specifics of this seminar private, given the nature of what was being discussed. Still, it deserves a mention because it was a fascinating discussion about the kinds of considerations that come into play when dealing with the ethical issues that can accompany corporate sponsorship.