I was a bit slack on blogging last month. I can tell, because I’ve got a new monthly links round-up brewing and the last one wasn’t very many posts ago. I’ve got a few drafts to polish up too but, in the meantime, here are a few notable (mostly work-related) bits and pieces.

On Friday, I spoke at the Market Research Society on their Researching Websites course. I was asked along at short notice but it just about slotted into my diary and, well, the MRS describe themselves as “the world’s leading research association” so how could I turn them down?

I was asked to talk about how web analytics might be used by researchers both at agencies and in in-house teams. It was a nicely meaty topic and in an area I’ve been concentrating on a lot lately. Because of the nature of some of the content I was showing to delegates, I won’t be uploading my slides. In general though, I covered:

Big thanks to James Lang at Join the Dots for inviting me along and to a couple of clients/contacts who recommended me for the gig.

I recently completed quite an in-depth search engine optimisation report for a rather fantastic London gallery, a piece of work that (partly) came as a result of this blog post on SEO for arts organisations. Funny that.

I know people shy away from SEO but making sure your website is as discoverable as possible by search engines and the people using them is really just common sense. There’s really no need for spammy, black hat nonsense.

Other than that I’ve been doing sessions on web analytics for a few clients, preparing for a couple of upcoming conferences and contributing to a few proposals that most definitely tick the box marked ‘really sodding exciting’.

Meanwhile, the rest of my colleagues at Made have recently launched a mobile site for the AT&T Performing Arts Center in Dallas and new websites for Melbourne Symphony Orchestra, Spitalfields Music and Hampstead Theatre among others.

Other things I’ve been up to 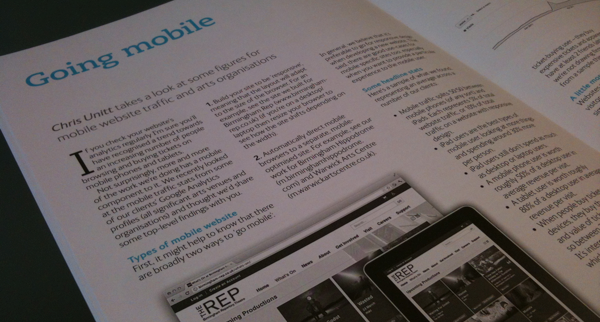 An article I contributed to (with initial research by Mark James) was written up in JAM, the Arts Marketing Association’s journal, in an issue that focussed on mobile marketing. It was essentially a rehash of this post about arts orgs’ mobile website traffic, with lots of nice figures and a chart for good measure.

Speaking of the AMA, I went to their regional meet-up in the West Midlands and heard Sarah Gee from Indigo Ltd talk about how marketing and developments teams can work together. I’ve been fortunate enough to work with Sarah on a few projects now – she’s very good.

I also went to the Art of Digital London meet-up at the very lovely Photographers’ Gallery, where Tate’s Tijana Tasich talked about how they went about the recent redevelopment of their website. All being well, I’ll be going to the next event on 20 July.

I’ll be at the AMA Conference in Brighton too – if you happen to be going along to that then let me know. Made Media is sponsoring the ‘Digital innovators’ networking/coffee break on the Wednesday so come and say hi.

UPDATE: I’ve just signed up for Museum Camp in Birmingham on 28 July.

Finally, I’m handing Created in Birmingham on to a new cohort. It’s about time.