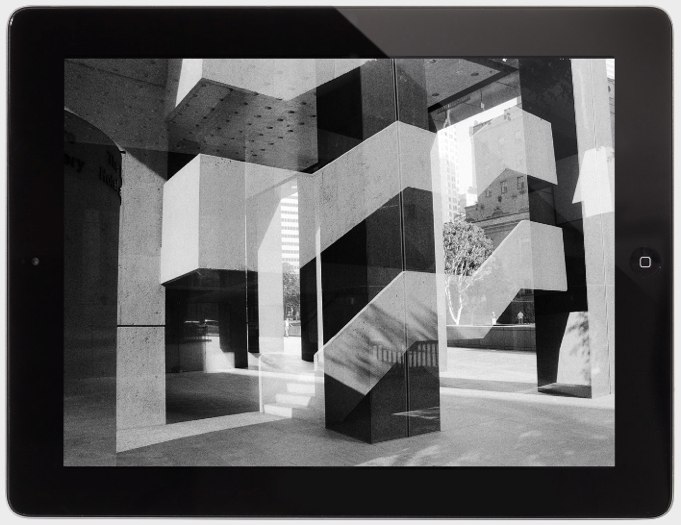 Randomly generated sequences of Jason Evans’s street photographs collected in New York, London, Paris and Tokyo – double exposures made in camera on film – are combined with a randomly evolving soundtrack generated through a combination of 17 synthesizers.

Yet again, more interesting stuff from job descriptions. This time there’s a job going as Head of Digital at the Royal Academy of Arts:

A Digital team is being established within the Communications department but with a mandate that extends far beyond digital marketing communications to the ‘digital enabling’ of the RA.

…and Soho Theatre are after a Digital Comedy Associate:

The purpose of this new role is to develop a digital delivery capability to provide comedy accessible online, on demand and internationally.

When technology meets art: embracing a digital future at the Southbank Centre is an interview with Southbank Centre’s CIO Rob Gethen Smith, who talks about various things, including their move to cloud hosting and improvements to their online ticketing. Those happen to be two projects I’ve been working on at Made Media.

The folks behind Indie Game: The Movie have written about how they made and self-distributed their film.

The are quite a few out there, but the write-up of MuseumNext on the V&A’s site is as good as any.

Swedish Radio Plus is an interactive radio player that allows people to contribute pictures, links, video clips and discussions that can be embedded into the programs. It’s kinda like beefed up Soundcloud comments. This video demo shows it off nicely.

The social media stats from the National Archives are worth a look.

It’s a promo, but this presentation from Tourism Australia captures their approach to involving other people (and their networks) in selling Australia.

The story behind Social Roulette. People thought they were putting their digital identity at risk, but it was also about showing that people don’t own that identity in the first place.

Digg are publishing survey results while developing their RSS reader. This post looks at preferred read later and sharing features.

Travelling round Europe using design to solve problems – 50 problems in 50 days is a neat idea with a nice site to showcase it.

Some insights into what people do online, firstly Guy Kawasaki’s approach would outdo many companies and What Really Happens On A Teen Girl’s iPhone.

I read Jessica Hische’s article about type and now know more about it. Good.

This bit from an article called What’s the best way to teach languages?:

I hardly ever use a textbook – I use Twitter much more,” she says, describing lessons where pupils discuss tweets written in French.

…made me thing that when I was learning French and Spanish at school in Kent I could just about pick up French radio. These days I’d have French music, films, newspapers/websites, tweets and whatever else a click away. Kids don’t know how lucky they are, etc and so on.

This thing’s amazing. Fluidic is a… dynamic, 3D projection light sculpture? It’s amazing, is what it is.