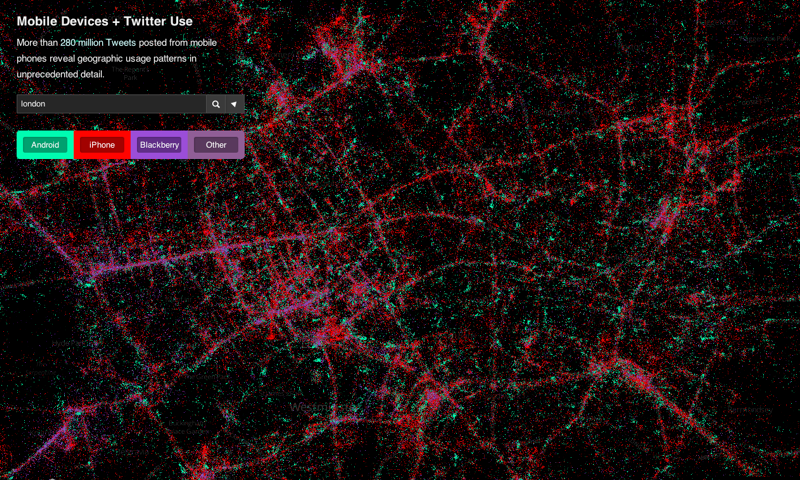 That’s a map of London, made by plotting the location of tweets from different mobile devices. Via Twitter + GNIP.

Phil Thompson took screenshots of paintings that had been blurred out on the Google Art Project website due to copyright reasons. He sent those to oil painting reproduction companies in China and had them painted to the scale of the originals. Et voila, an ongoing artwork called Copyrights.

A presentation from The Collections Trust called The Digital Agenda in Museums 2013.

Paddle8 is an online auction house. I seem to find another one of these every month, all going after different levels of the auction market.

Meanwhile, mediuum says it’s ‘Bringing new art to a screen near you’.

See3 Communications, Edelman and Google for Nonprofits have put together benchmarks for nonprofit video and a guide for creators.

Sure, it’s promotional stuff for Facebook ads, but this case study: Cirque du Soleil Shifts Budget From Traditional Channels to Social Media = 18X RoI is still worth a mention.

I’ve seen Matt Locke talking about attention and applause and audience behaviour in general and he’s always very interesting. This is a recent post called After The Spike and After The Like — A Brief History of Attention — Medium.

I stumbled across a couple of Amazon things recently. Firstly, Amazon Storyteller, which is a tool for turning an Amazon Studios screenplay into a storyboard. Then (working backwards), Amazon Studios – which is developing feature films and episodic series and is open to ideas from whoever wants to submit something. The development process is interesting too, stressing early audience involvement.

Lots of interesting stuff in this article about The World of Black-Ops Reputation Management.

OutWit Hub is a thing for breaking down web pages into their constituent parts, organising them together. Handy.

Potluck is a new service for sharing and discussing links. I’ve not seen it get much traction, but who knows with these things. Anyway, this quote, from the blog post introducing Potluck, made me think:

Early internet users are used to interacting with strangers online; for them, services like forums were the norm. But people under 25 grew up on AIM and Facebook, so for them, the internet has always been a place to hang out with their friends

Not ground-breaking, but notable that we’re talking degrees of variation depending on when a person’s interaction with, and expectations of, the internet were first formed. A bit like how people used to bang on about how ‘this is just IRC’ when people discovered Twitter, maybe. I dunno.

Lastly for this section, this is what I think whenever I hear someone churning out the word ‘playful’ in a work context:

Original quote spotted on xkcd’s The Pace of Modern Life:

Bonus vid: I almost went with the Photoshop Live – Street Retouch Prank, which is still worth checking out.