Today I went to Digital First? the Arts Marketing Association’s conference on marketing, culture, audiences and digital. Here are some notes from the keynote sessions, plus some thoughts… 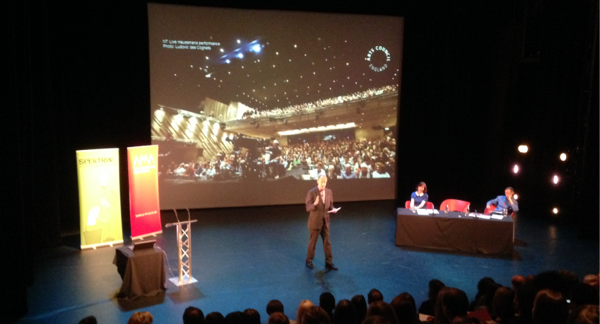 Three key aspects to his talk:

1. Production
The creative stuff – not the subject of this talk, although he named a few organisations who are doing good with work with digital creativity (including Blast Theory). He also gave a nod to the UK games industry.

2. Distribution
Importance of on-demand video.
The Space had 1.5m million visits, with 43% of visitors coming from overseas.
Working with further aggregators of content – announcements coming soon.
ACE will put seedcorn investment into a multichannel network on YouTube.
Also planning workshops and talks with Google via Creative England and Culture24.

3. Sales/marketing/fundraising
Data is important.
Referenced the Digital Landscape Survey and Audience Finder.
Data should be considered an asset, not a tool for accountability.
Knowledge and skills are required at a more senior level in arts organisations.
There should be greater collaboration and sharing of data. Especially as regards touring organisations.
In the next investment round, NPOs will be told they must share audience data with touring companies.
Also mentioned creating a centralised database of audience details. To be contributed to by public and private organisations.

Some of the mistakes he’s come across:

The size of your organisation, community and ego doesn’t matter when it comes to online engagement.
Need to be clear about the interaction you want to have with people – let them understand how they can be involved.
Full house at buzzword bingo.
The ‘digital navigator’ is someone who acts as a bridge across the organisation.
Abhay Adhikary’s Prezi presentation.
Kajsa Hartig’s slides.

There were some interesting things in Sir Peter Bazalgette’s talk. I’d like to see the detail of the YouTube thing – any link with the YouTube Space in London? Also, I’m also not sure what the plan is with this, The Space and the pop-up BBC arts channel(s) on the iPlayer that Tony Hall recently talked about.

My gripe would be that it’s all very TV-heavy. What about artforms that don’t lend themselves to the TV treatment so well? Maybe the plan is just to double down on a format that works.

I’m really not keen on this idea for a database of audience data/contact details. Maybe I totally misunderstood what was being proposed but, if it’s what it sounded like, it sounds like a logistical nightmare.

Is it going to apply to existing email lists? Will NPO’s be forced to participate? What details will be stored? If my details get in there, will I be told who else gets hold of them? Who’s going to pay for this? Am I going to be emailed by touring organisations and the venues they’re touring to next time they come round? Has anyone mentioned this to someone who knows anything about data protection?

More widely, regarding the theme of the day, I’m not sure I learned much about what it takes to be a digital organisation (although, hands-up, I didn’t go to all the sessions I could’ve – the perils of the office being so close by). All the speakers seemed to be from organisations where digital activity is part of what they do, rather than being all that integral – turn off the electricity and the odd project might come to an end but the organisations would endure.

I didn’t get the sense from anyone that they were on a path to a point where they could pack up the ‘real world’ stuff and continue online/digitally. Maybe I’m taking it all too literally and it’s not about throwing all your eggs into a digital basket. It might just be because of what I was thinking in the recent post ‘What should an arts organisation’s website do?‘. In fact, the more I think of it, that sort of organisational change stuff probably wouldn’t be hugely relevant for a marketing-focussed conference where most of the attendees are at the junior end of the scale. It’d be interesting though.