In this post I wanted to take a look at which of the organisations in my sample group seem to be getting some traction on Facebook.

I wanted to see who’s attracted the most attention, who’s making the biggest noise at the moment and (especially) who’s managing to punch above their weight.

Here’s what I found:

The organisations with the most likes

This is the total number of people who have ever clicked Like on the page (not just an update on the page):

The most ‘talked about’ organisations

This is the number of unique users who, in the past month, have engaged with the page in some way – this happens when someone likes a page, posts on the wall, likes or comments on or shares a post, answers a question, RSVPs to a page’s event, mentions the page in a post or take various other actions. You get the idea.

It’s the same organisations in both lists, just in a slightly different order. That’ll partly be because (as you’ll see in the table below) the numbers for those five seem to be in a different league to everyone else’s. Beyond that though, some sort of correlation should probably be expected. Let’s have a look at a graph to check (I’ve actually removed the top five to make it easier to decipher at the lower end). 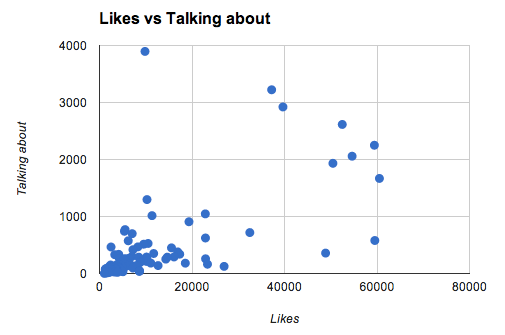 Yep, that’s about what I’d expected. How about those outliers though? Those are organisations that are being talked about more or less than you’d expect, going by the number of likes they’ve gathered. For instance, that dot in the top-left corner is someone being very popular.

Here’s the data, collected on 28 February 2014 and sorted by the ‘Talking/Liked ratio’ column.

The organisations punching above their weight

Divide an organisation’s ‘talking about’ figure by their number of likes and you get a ratio you can use for comparison. By this method, these are the organisations that are currently doing best on Facebook:

These are the outliers from that graph. The positive ones, at least (scroll to the bottom of the spreadsheet if you want to see the others). Our ‘big 5’ from earlier on don’t look quite so hot by this measure.

I’ll let you click around and see what’s what.

What does this all mean?

Something to point out straight up – this is all very variable. That ‘talking about’ number could be affected by all sorts of things. For instance, a big announcement, a season onsale, a major event, a Facebook ad campaign… the list goes on. So really my table shows a snaphot of how things were at a single certain point in time. We’d need to check the standings over a longer period to be able to say that (for instance) Northern Ballet are absolutely the best at Facebook.

Beyond that, as always, this information can only tell us so much.

The number of likes a page has attracted is pretty much meaningless. In fact, here’s me when someone tells me about how many likes a Facebook page has:

Sorry if you’re reporting that number to anyone. All it can really tell you is how many people once heard of an organisation and expressed some sort of affinity for it. That’s about it. Ok, maybe it indicates how many people might show some propensity for engaging with your updates in some way. But that’s it.

The number of people talking about a page is a much more interesting figure. Those are people who do give a bother about you and have done recently. That’s the one that I’d be most interested in if I was running a Facebook page.

But even then, having lots of people talking about you on Facebook might just mean that you’re good at Facebook. If the point of your organisation is to make people click things on Facebook then you’re winning. If not, then you need to make sure it’s all being done to benefit your organisation in some way. Put more bluntly, what’s better?:

Come to think of it, your answer to that would could be very telling in all sorts of ways.

I’m not about to turn this into a ‘how to succeed on Facebook’ post. There are plenty of those out there. All I’d say is:

This post is part of an ongoing series where I’m using digital metrics to see what a group of arts organisations are doing online. See other posts in the Arts Analytics series and sign up to the free email newsletter.