Instagram has taken off like crazy, built by a small team and acquired by Facebook for big bucks. It’s also a platform that ticks the boxes of a few very prominent trends – mobile-first, visual-led and driven by the creativity of its users.

For this post in the Arts Analytics Series I wanted to see:

Taking my sample group of 100 organisations, I looked up their Instagram accounts and then pulled out their key stats into a spreadsheet. Firstly, though…

This gets a sub-heading of its own, because searching for accounts on Instagram is a pain. To find the accounts I tried these three things:

If I missed any accounts then please let me know. I think I did pretty well, but reckon one or two might’ve passed me by (and please make sure you make your account easy to find).

Here’s the data, sorted by the number of followers:

The organisations with the most followers

Why are they so popular? Well, it’s not going to be down to one single thing, but here are some factors:

The Photographers’ Gallery has also posted the most photos by far quite a long way. Speaking of which…

The five most snap-happy organisations

Although posting a lot of photos doesn’t necessarily translate into lots of followers there does seem to be some sort of correlation. Here’s a graph of followers v photos posted: 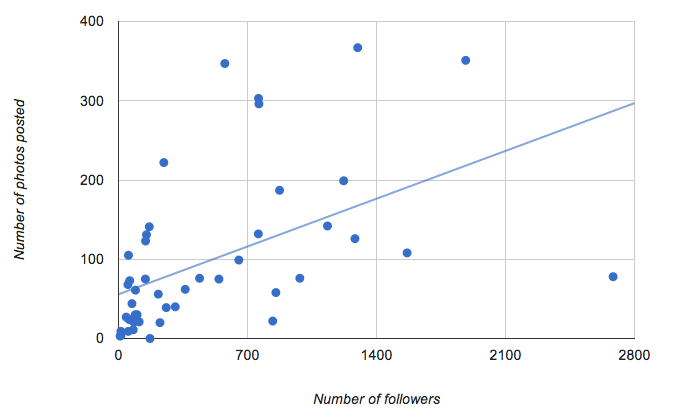 I took out the orgs with more than 3,000 followers because they made the graph hard to read.

There’s a bit of a trend there, but we’re working with limited data and it’s fairly erratic. I’d say it’s a signal, but not a strong one. I guess the more photos you post, the more often you can cross-promote across other social media accounts and the more ‘alive’ and worth following that account is. The content still has to be good.

Beyond that, the discovery mechanisms in Instagram are currently pretty limited. For instance, just because you’re posting lots of photos and they’re getting a lot of likes or comments, doesn’t mean that friends of your followers will see that. Not in the way that retweets will get you more visibility on Twitter or interactions will increase your chances of showing up in news feeds on Facebook (although that’s becoming a fond memory anyway).

A couple of other observations:

It’s early days for Instagram and, honestly, it’s probably too early to draw too many conclusions about anything much from the figures I’ve collected. If you’re looking to find what’s ‘normal’ then I don’t think anything particularly coherent has emerged.

However, it’s interesting to see which organisations have started figuring out this relatively new platform.

It’ll be interesting to see what happens with organisations’ use of Flickr from this point. It’s been the platform of choice for storing photos for some time, but it also feels like a less popular destination these days. The two services have very different sets of functionality and so lend themselves to different purposes, so I’ll be watching with mild interest.

By the way, I wasn’t able to look at the number of comments and likes on photos. If anyone comes across a way to do that then let me know. It’d be interesting to see what sort of thing is getting the most traction and to marry those figures up with some of the numbers I’ve collected.

A couple of tips:

Anyone else got some tips to throw in?

By the way, someone requested that I cover Instagram as part of the Arts Analytics series. If you’ve got any requests then just let me know. If I can accommodate it then I will.

5 replies on “Arts Analytics: which arts organisations are on Instagram?”