The Library contains a spreadsheet with the CMS, ticketing platform, donations platform, and website designers/builders of 350+ of the largest UK cultural organisations.

I’ve just added a column to that spreadsheet showing which ecommerce platforms those cultural organisations are using for their online stores.

Of the organisations in my sample, 22% have an online shop. The others may well have some sort of ecommerce functionality but, rather than selling merchandise, they’ll be focused on some combination of tickets, memberships, and donations.

The chart below shows which ecommerce platforms these cultural organisations are using. 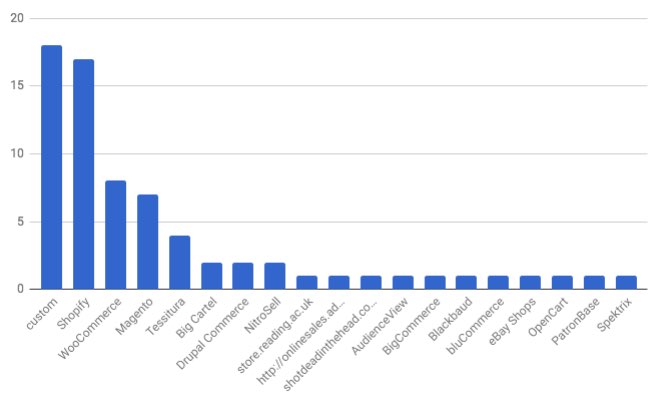 In case the chart is too small for you, or you’re using a screen reader, those are:

I’m not surprised to see Shopify up there. Most of the online shop launches I’ve seen over the past year or so have been on Shopify. I also wouldn’t be surprised if some of those custom solutions were replatformed onto Shopify over the next year or so.

Not that it’s always necessarily the right choice – copying everyone else is rarely a good guide. There are lots of considerations that might affect your choice of ecommerce platform.

However, from looking at who’s using what, a few trends seem to emerge:

The Library is a constantly growing collection of information and resources related to the digital aspects of cultural organisations.

If you want to know which organisations are using the various ecommerce platforms (and much more besides) then join up and explore the data.

More about The Library here.

I’ve launched a thing called The Library. Here’s a bit of background for anyone interested in the what, why, and how.

First up, in case you’ve not already, then pop over to The Library and read the FAQ. That should cover the basics.

The Library sits under the Cultural Digital banner – that’s the name of the weekly email newsletter I send out – and it’s a subscription service. Sign up and you’ll get access to a Google Drive containing info and resources relevant to how cultural organisations are making use of digital tech and media.

I reckon it’s very useful and pretty cheap. £200/year compares really well to the sort of fees research firms charge for their subscriptions, and I know I pay more than that for memberships and SaaS subscriptions that deliver much less value.

The Library is in very soft launch mode at the moment and will open properly in very early November. If you sign up now then you can save a whopping 50% off your first year.

There are quite a few reasons for this.

Perceived need. A couple of years ago I put together a Google Sheet with lists of digital agencies (and others) that had experience of working with arts organisations. People seemed to find that really useful but I could only find the time to update it very occasionally. Although it wasn’t the intention, that has served as a kind of MVP for the Library.

Another thing is that in my consultancy work I get asked a lot of questions about what systems people are using, which agencies everyone’s working with, whether there’s a certain type of job description out there they can take inspiration from… that sort of thing. Previously, there was no quick and simple way of getting hold of that information. The Library fills that gap.

The number of early sign-ups so far has reassured me that the perceived need is an actual one so, fingers crossed, that’s the idea successfully validated.

Spreading the cost. I have to stay on top of this information in order to do my work, but it’s not the work itself. Collating it all takes a considerable amount of time and expertise and I can’t see any one client paying for it. Spreading the cost among lots of people would make it sustainable, allowing me to justify dedicating time to making it more comprehensive and keeping it all up to date.

A more informed sector. I can only work with so many people one-on-one. If there’s a way for the sector’s organisations, consultants, funders, and suppliers to all be that bit better informed then that’s a good thing, right?

An experiment in selling an info product. I like to learn by doing things. I’ve never run a subscription-based service before so this is a chance to do that. I fully expect the lessons I learn here to carry over to other things I do.

Selling my by-products. Years ago I read a Signal v Noise blog post about selling your by-products and it’s an idea that’s stuck with me since. In a sense, that’s what I’m doing here.

Here’s what I’m using to put this together.

The website was built very quickly with Strikingly. However, the subscription payment platforms you can integrate with are a bit ropey, so for the time being I’m taking one-off payments using Typeform, which integrates with Stripe. In turn, Stripe sends money through to my bank account and connects to Xero, my accounting software.

The payment bit will need to be revisited soon because it’s a long way short of adequate. However, it’s enough for me to launch with. Perfect can wait a little while (yay agile!).

A few simple automations kick in when someone signs up:

Google Drive is the hub for all the resources. Library members will be given a login to a top-level folder with lots of very nicely ordered folders, spreadsheets, and documents.

Sign up before it launches to get the first year for £100.

“we’re very passionate about it, we’re strong on it”

If you worked on the digital side of the museum world I imagine you’d be pretty chuffed to hear a high-profile museum director publicly supporting this kind of work. Right?

But if you were following the reaction online over the past couple of days you’d have thought he’d suggested sacking the V&A’s (consistently award-winning) digital team, ripping out the building’s wifi, and deleting their entire online collection.

In case you’re not up to date on this one, Tristram Hunt is the recently-appointed director of the V&A (or a “novice museum worker” if you want to get all ‘not one of us’ about it, as several did). He recently gave an entertaining talk at the Hay Festival about the V&A’s history, then answered questions from the audience about acquisition policy, plywood, and using technology to make their collection more accessible.

His answer on the last topic was reported in The Times (Museum visitors seek refuge from digital world) before being increasingly misinterpreted:

I wouldn’t bother clicking any of those if you’ve not already read them, but keep the headlines in mind for later on.

Now, I got a C in GCSE History a couple of decades ago, so I’m fully aware of the benefits of going back to primary sources.

The Hay Festival website has a rather wonderful thing called Hay Player. Audio recordings of talks going back several years can be found there, and you can pay £1 to download one. A small price to pay.

Here’s where you can get a recording of Tristram Hunt’s speech and the Q&A that followed it. I highly recommend giving it a listen. The bit we’re interested in starts around the 54 minute mark.

I hope the good people at Hay don’t mind me reproducing the question and answer.

[Question from the audience] “You’ve talked about making the art more accessible for people in regional locations but you didn’t talk much about how technology can help you to do that. So I’m wondering if you have strategies around using the internet, social media, apps, etc to make things accessible.”

[Tristram Hunt] “Yes, this is a really strong and active area of debate. In one of our new galleries you can, on your iPhone, download your own personal guide to the contents of the galleries. And it’s done beautifully – there’s music, the curators talking… but you’re wandering around listening, either with your headphones or listening to your iPhone, whilst looking at the artefacts.

And actually it hasn’t proved that popular. There’s a sense of people often coming into the museum as a way to get away from digital activities. And what we’ll find is that they’ll then go home often and want to look at what they saw today, or they’ll be in the cafe looking at it, so they’ll reflect afterwards through digital media and digital access on what they saw, but in terms of their own personal interaction with the object, often they want to step back from that.

At the same time, what we’re involved in is a massive programme of digitising our collections. But again, it’s a debate. There’s a very big debate in the museum world about the Metropolitan Museum of Art and the amount of investment they put in to digitising their collection, which means that you’re taking it away from other areas.

And so we’re very passionate about it, we’re strong on it, but it’s rather like the newspapers – no-one’s got the answer yet about what you should do.

What I’m very passionate about is ensuring that we’re giving teachers the professional development and advice they need to be able to access our collections online to inform their teaching.

So if we pursue it though a more education-focused lens, that would be my ambition”.

That doesn’t sound so ridiculous, right?

What he did say is that there’s a debate about how in-gallery technology might best be provided. I think that’s fair, and there are plenty of very interesting projects and experiments we could all point to that are exploring this area.

We might disagree with the assertion/assumption that people want to get away from interacting with digital technology in galleries, but there’s grounds for a debate (see the comments on the Times article). A more nuanced position is likely to be summed up by any or all of these:

With a big fat ‘it depends on the circumstances’ bolted on.

Tristram uses the example of an audioguide in one of their galleries not being massively popular, and of course, we all know there are plenty of reasons why uptake of a particular thing might not be great. But you don’t even have to leave the building for an example of in-gallery audio technology being integral to the experience – see the current Pink Floyd exhibition that’s had rave reviews.

It’s also true that there’s a debate about the amount of museum resource that should be allocated to digitising collections. The particular merits of the Met Museum case can (and have been) debated too, but his key point seems fair enough to me. Museums don’t have bottomless reserves of cash and there’s a perfectly valid discussion to be had about how activity within a museum is prioritised.

So go back to those headlines again. How well do they line up with what was actually said? And where did some of those quotes comes from?

In the interests of transparency, I should mention that the V&A are one of my clients. I’ve never met Tristram Hunt though, and I didn’t speak to anyone there about this post before hitting ‘publish’.