I had an email in the week about a little gig/party that someone was going to be hosting at their house – part of the (mobile phone sponsored) Unlit tour that has been making it’s way around the country for the past month.  It sounded interesting so last night, after some Arstfest-related fun, I popped along with Jo Geary and Frankie Ward in tow, meeting (fellow ‘premier Birmingham blogger‘) Bobbie Gardner down there too.

The set-up was a big tent in the back garden; nicely lit with a small crowd of people already gathered and three acts to entertain us.  Jont was hosting – he’s been organising Unlit gigs for the past 10 years or so.

First up were The Old Dance School who threatened to be a bit fiddly-dee but were actually a lot of fun.  Birmingham/based too, I think. 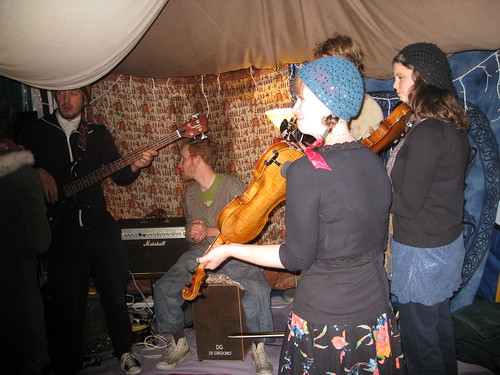 I might nearly have seen them at the Moseley Folk Festival this year but I’ve a funny feeling we were drying off in the pub at that point.  Anyway, they were good and I filmed a bit of them:

Next up was Bust My Flex, a guy with a guitar who sang scatty, odd songs – almost blues pastiches – and the odd instrumental.  I liked the way that he put his whole body into playing his guitar and sounded nothing like you’d expect from looking at him.  Here he is (the pic’s by Bobbie, by the way): 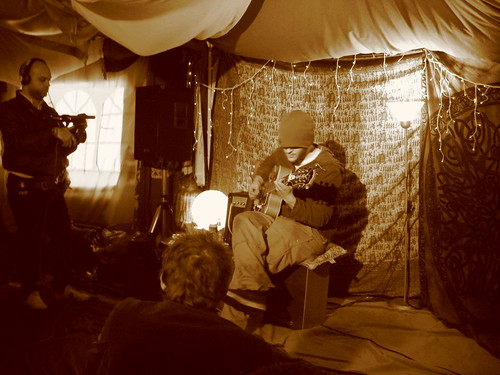 The third act was poet and occasional ukelele player, Tim Clare. He was a lot of fun, with his first poem the cleverly obscene ‘Gay Day’. It’s up on his MySpace and worth checking out although it was delivered much better live.

I wasn’t so keen on the second poem but the third and final one was a funny little gem. Again, the Sound of Music-inspired ‘Favourite Things’ is on Tim’s MySpace but here’s my video of part of it:

We sloped off after that, although the party looked like it was going to carry on.  Btw, here are the rest of my pics.

The Unlit chaps were streaming video with Qik on the night but the bits that I’ve seen were dreadful (mainly shots of Jo and Frankie’s backs).  They were filming with other cameras too and I expect that’ll be edited and uploaded soonish.

Actually, the social media side was pretty interesting (err… to me).  They’re blogging often, Twittering (although to a handful of people and they’re not following anyone back – shoutcasting rather than chatting, then) and are upping pics to Flickr and vid to YouTube.

It’s got me thinking dangerous thoughts though.  Sure, I’ve got Film Dash to sort out, but a few little impromptu gigs?  How hard can it be?  It’s something I’ve been thinking about for a while, especially after coming across Welcome to our TV Show a little while back.  Hmm…

4 replies on “Unlit in Birmingham”