As you may have heard the blog I run, Created in Birmingham, won the award of Best UK Blog in the 2008 Weblog Awards.

As well as being pretty pleased with the outcome I also found the whole thing fascinating. I’ve got a list of blog posts I’d like to spin off but I thought I’d start with something that only ocurred to me because of this tweet from @anne_brand: 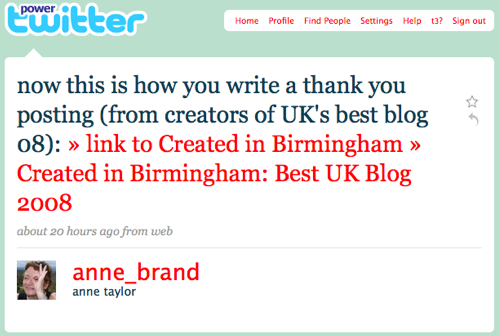 Anne (who I’ve never met) is linking to this thank you post on Created in Birmingham in which I thanked the usual people, mentioned one of the other blogs that I thought was particularly worthy of attention and listed everyone who had given their support online.

I’m guessing her tweet referred to the list of supporters, which ended up being rather long. Over 200 individual Twitter users mentioned CiB, as did 80-ish blogs/forum posts/organisations/etc. Keeping track of them all and compiling a post with links cost me a few hours sleep and a little piece of my sanity. It was important to do it though.

Here’s the thing – it didn’t occur to me to not do it. CiB won the award thanks to the efforts of the community around the site. It’s only right to thank everyone and the way to do that in internet-land is to link to them. So that’s what I did.  It took ages keeping track of everything and writing it up but it’s such a small price to pay really.

I have previous in this regard though – I did a similar job after the 2008 Supersonic Festival and Birmingham Opera Company’s ‘King Idomeo’. These ‘collective memories’ end up being an interesting document of who said what and I’ve always meant to write up how I go about collecting all the links.

How to do it

I discovered the tweets using Twitter searches of the following keywords – ‘Created in Birmingham’ CiB’ ‘#votecib’ and ‘http://tinyurl.com/9m6mwl’. By way of explanation:

To track these in real time, and respond with a thanks if/when necessary, I used Tweetdeck. Tweetdeck is a desktop-based Twitter client (that is to say it’s a little programme that you can use for reading your Tweets) which has a large panel display and allows separate panes for searches. It’s a bit industrial-strength as Twitter clients go but it doesn’t half get the job done. Heres what it looks like (click to enlarge):

It’s not quite as scary as it looks but it was a bit of a distraction. Whenever someone tweeted using one of those search terms I recorded their name in a text document I kept handy. That’s all there was to it.

I did a Google blog search and sorted results by date to see if anything relevant had been posted. I did that fairly regularly to keep up with any ongoing conversations and to see who was talking about us. I bolstered this with the odd search on Twingly and Icerocket too.

It can be quite hard to search for a post or comment left in a forum but I tried Boardreader, Boardtracker, and Omgili. The results were better than nothing, but only just.

At the end of the voting process I did a couple of regular Google searches (mainly combinations of the keywords ‘CiB’, ‘Created in Birmingham’, ‘ Best UK Blog’, ‘Weblog Awards’ and ‘vote’). Working up to page 20 of the results I came across a few new items.

Again, I recorded the URLs of any blogs I found in a text doc to be written up later.

A couple of things I could’ve (should’ve) used to lighten the load:

If I was monitoring these terms for longer than a week I’d have set these up straight away.

This sort of thing can be applied to whatever you’re interested in. It would make sense (and is not at all egotistic) to have some sort of automated search set up for your name, although bad luck if your name is John Smith. Ditto for your company name and any topics of particular interest.

However, I’m sure there are easier and more comprehensive tools/techniques that I’m not yet aware of. Any suggestions would be welcome.