This talk is available as a podcast. 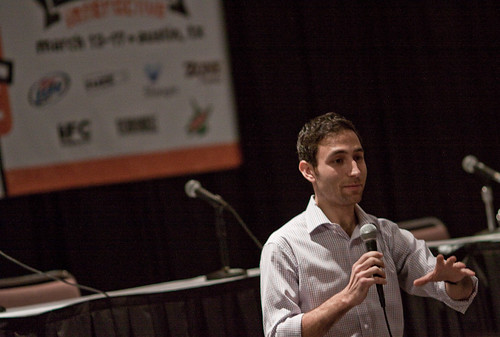 There is a love for ideas generation but organisation is as important as creativity.
In the creative sector there is a general lack of accountability and leadership as well as disregarded and isolated networks. There’s also a lack of feedback.

They have developed The Action Method (now online and with iPhone app).

Big point is that ideas don’t happen because they’re good. There needs to be a bias to action.

Ideas happen if there is:

Generate ideas in moderation and have someone to kill off the rubbish ones.

Distinguish urgent from important. Hoarding urgent items is a problem. May be able to delegate constant time-based stuff. Also, use windows of non-stimulation to get important stuff done

Organise with a bias to action. Achievement is action taken.

The Action Method – from any occasion of creativity (meeting, dream, brainstorm, etc) one of the following should happen:

Reference items are often worthless and only useful for legal reasons or for when someone is absent.
Measure a meeting in action steps.

Don’t just meet because it’s a Monday. Periodic meetings can be a waste of time if you get into the situation of itinerary-stuffing.

Publicise productivity. Brainstorming can be creative and visual – need to do the same for the process of getting things done.

Create a backburner ritual. Take time to sit and work through it.

Foster a culture of capturing action steps. Make sure people write things down. get people to say what they’re doing at the end of a meeting – makes sure less is missed and nothing duplicated.

Attraction breeds loyalty. Applies to productivity systems as much as anything else. If it helps, make folders pretty or, if someone likes to hop from system to system then let them – newness of organisation may be helping them.

Prioritise projects visually – use an energy line. This will show capacity of the team. Plot projects on a line showing priority from Extreme – High – Med – Low.

Share ownership of ideas too. Let others run with them. Letting go can be hard, but beneficial too.

Fight your way to breakthroughs – let all parts of a team fight their corners to make sure their standpoint comes across.

Don’t become burdened by consensus. Fight for a few of the more extreme ideas and let go on the rest (example of the person designing the World Trade Centre memorial.

Get respect – overcome the stigma of self-marketing. Example of violinist Joshua Bell busking.

If you’re not getting respect for your strengths then you won’t be listened to. It’s your responsibility. Creative community – lot of talent but don’t want to market themselves well enough because there’s a stigma attached.

Leaders talk last. Not speaking is not a natural inclination for leaders.

If leader speaks out first then others are more likely to fall into line behind or not differ quite so much in their views.

Also, this discourages new talent and younger team members from getting involved/engaging.

Reduce the amount of ‘insecurity work’. Cut down on checking information – analytics, Twitter searches, stats. People check these out of insecurity, not business need.

Value the team’s immune system. Some ideas need to be killed off. Need the people who will shoot down ideas and will help to cut down unnecessary features, etc.

Stop focussing on visionaries. Most new ideas fail. Ideas often generated for the self of the person’s own crowd. Run them by someone ‘normal’ to see if they stand up (ie your mum).

Judge new hires based on initiative, not experience. A history of taking action is better than a history of good jobs.

Value chemistry over people. Having all the best people is good but having a complementary mix of skills on a team may be better. Harder and more expensive to hire for this but worthwhile.

Unique is opportune. Tend to shun people when they go against the grain but we celebrate heroes as being like this. Conformists are the oil that smoothes the operation of society.

Other posts about this talk: