To kick things off, there are two reports that I’ve flicked through and decided need some proper attention. First up is Getting In On the Act: How Arts Groups are Creating Opportunities for Active Participation (PDF) from The James Irvine Foundation. Frankly, they had me at this diagram: 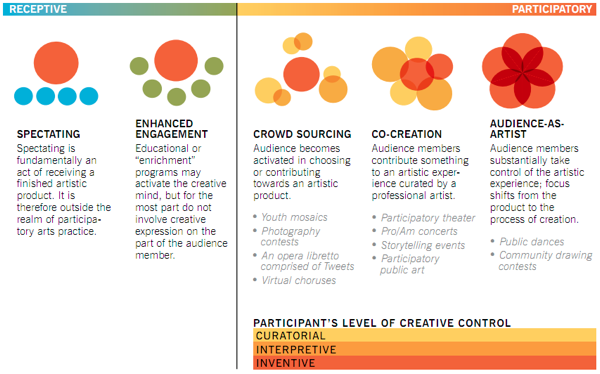 I was also fascinated by The Arts Ripple Report that Nina Simon blogged about:

Here’s how the project worked: researchers worked with small focus groups to understand their associations with arts and culture organizations and developed several framing arguments for public support of the arts. Then, they interviewed 400 people by phone and online, presenting them with a short framing argument (80-120 words), followed by a series of open-ended questions intended to determine how memorable the argument was, how it influenced their perception of the public value of the arts, and how likely it was to inspire action

Leaning back towards the tech side of things, Wieden + Kennedy’s post on Why We’re Not Hiring Creative Technologists started a fair few conversations. As did Steve Yegge’s unintentional thinking/ranting out loud. I’m still not quite sure to make of the Photos of Sarah article in The Awl and the post that I’ve brought up in conversation with others more than any other has been Bobbie Johnson’s one about failure.

Some apps and services