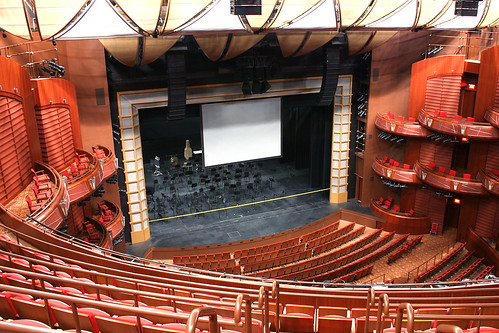 When you go to the theatre why don’t you see trailers?

This question’s been bugging me for a few weeks now. After all, when was the last time you went to the cinema and didn’t see trailers? Why the difference? In both cases you’ve got a captive audience of a few hundred (or maybe even a couple of thousand) people all facing the same direction and open to being entertained.

It’s not just the theatre either (and I’ll include plays, musicals, opera, dance and comedy in that). There’s rarely anything at concerts or gigs where the crowd is left standing around for 30-45mins waiting for the next band to set up.

Actually, ‘trailers’ is probably a bit misleading. I get that a noisy video trailer for an upcoming show might not hit the the right tone, but there are all sorts of things that can be put on a screen.

How about a (silent) slideshow of upcoming events? That wouldn’t be so invasive, would probably do the job and needn’t be too time-consuming or expensive to pull together.

Or you could put up:

I’m sure that, given five minutes thought, you could come up with all sorts of creative/fun/useful alternatives for those screens.

Setting up a screen (or projecting on to something else) temporarily can’t be that difficult – after all, I’ve seen more impressive things done on stage. At the Hippodrome alone I can think of three different ways I’ve seen screens used recently:

Come to think of it, the NME used to bring screens to the O2 Academy for their tours. Between bands they showed promos for the magazine, the tour sponsor and the bands.

What I’m saying is it can be done and in various ways. Of course I’ve really not got much of an idea of the cost/logistics involved so am ready and willing to be shot down mercilessly in the comments.

I remember when we were offered the unit in the Bullring for the Created in Birmingham shop, the alternative was for the shopping centre to sell the window space to a display advertising company who would serve up adverts to the passing crowds. Those screens would have paid for themselves very quickly indeed.

Would the same be true for theatre screens? There might be a direct financial benefit in terms of tickets sold and funds raised. I’ve no idea about the logistics involved, there are some happily established cinema advertising networks out there. I wonder what it would take to tap into those.

Is it artistic? Financial? Logistical? Is there some indication that audiences would object?

When I raised the question on Twitter last week Tim Rushby at BCMG tweeted back saying:

Inside auditorium I haven’t met a director that would allow. In foyer I guess it’s a resource (lack of) thing

Which was interesting because, come to think of it, I can think of a few larger arts centres that use screens in and around their foyers, making their absence from auditoriums that bit more glaring.

I’m pretty sure this isn’t an amazingly revolutionary idea – someone must have looked into this before. Or someone must be doing it. I realise I don’t know much about the practicalities involved here and it’s been bugging me, so if anyone could shed any light I’d be grateful.

Typical. I hit publish and minutes later find this post from LondonDance.com about Sadler’s Wells (a client, no less) trying out cinema-style trailers of upcoming shows in 2009. I wonder how it went. Are there any more examples?

I’ll also link to this from Alistair Smith in The Stage who makes many of the same points but also adds some further thoughts.

7 replies on “Trailers in the theatre”